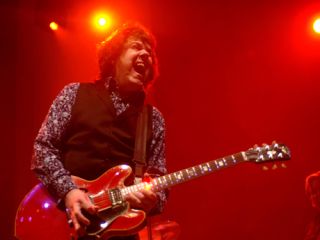 Belfast born Gary Moore was, and still is, one of the most celebrated guitar players to come from this side of the Atlantic, as his 40-year career testifies. Moore was perhaps best known for his fiery blues playing, and anyone who has picked up an electric guitar in the past 20 years has more than likely had a go at playing Still Got The Blues, and then quite possibly given up at the solo towards the end!

However, before Gary went back to his blues roots, and after stints in Skid Row and Thin Lizzy during the late 1960s and '70s he was one of the premier rock guitar players of the 1980s, with classic tracks such as Over The Hills And Far Away, Out In The Fields (with Phil Lynott), and the wonderful instrumental tune The Loner being prime examples of his melodic writing and great playing.

Unlike many guitarists, Gary was always equally at home playing fast alternate picked lines as he was when playing flawless legato phrases, and his rock playing was always as high on melodic content as it was on technique, with his aggressive vibrato being instantly recognisable.

His playing had a profound effect on players such as John Sykes, Joe Bonamassa and Kirk Hammett to name a few, and whether he is unleashing classic rock riffs and licks in songs like Run For Cover, or blues soloing in Oh Pretty Woman, he has always been a popular choice for musicians and non-musicians alike.

Here we're harking back to the Gary Moore rock era of the '80s, so rather than the bluesy bends and phrases which he has been mainly known for in recent times, it's an aggressive rock tone and technique that you should aim for. The track starts with a galloping rhythm which Moore often favoured on some of his 'military influenced' songs, and even though it isn't particularly fast it will still take a lot of work to play really accurately throughout.

Make sure you don't get sloppy with timing and articulation as the tune progresses. When you get to the solo you'll need the B natural minor scale (B C# D E F# G A) and there is plenty of fretting hand legato and alternate picking to focus on.

Interestingly, for someone who in latter days used pentatonic and blues scales a lot, Gary often stuck to the major or natural minor scale in his rock playing. Although there isn't much vibrato in the solo here, when you do need it make sure that it's aggressive and wide.

As with the rhythm part, be as precise and accurate as possible when picking single notes - when you get to the final phrase be careful that your hands aren't both moving at different speeds to each other. Check out the playing tips for more information about how to approach this fine guitar player's style. Many thanks to Mark Prentice for playing bass on the backing track.

Watch out for the accents in the first eight bars and make sure that your picking hand is in complete control of the attack on the strings. This whole section needs to have a very tight feel.

It's not too tricky to play this part of the piece, but you'll need to be very strict with your accuracy. Practise very slowly, watching how you cross from a higher string to a lower one each time.

The solo begins with a lot of fretting hand legato. You should pick the first note, then it's hammer-ons and pull-offs for the next two bars. You're pulling of to the open fourth string after every note, but make sure that you're muting the other strings so that you don't have any unwanted strings ringing. You can mute the third string and fifth string with your picking hand fingers to help with this. We end with an alternate picked run and whole tone bend with plenty of vibrato, which is a trait of both Gary's rock and blues playing.