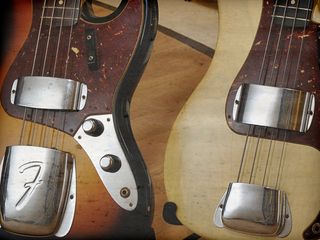 Every month, Guitar Techniques attempts to answer guitarists' playing posers and technical teasers with expert and practical advice. Here we tackle the subject of basslines...

I'm in a band with a bass player who is always asking me what notes to play under chords. I've written out some of the songs for him but he always ends up playing the root of the chord which sounds a bit predictable and has the effect of making everything drag a bit.

Is there any quick fix for his condition or is the only choice to replace him? (which I'm a bit unwilling to do, seeing as he's my brother-in-law!).

Well we wouldn't want to upset the family dynamic, now would we, Mal? It sounds like your bass-player-in-law may need some lessons from a good teacher, but as a start we'll give you a few tips that you can (subtly) pass on.

As far as what note sounds good under any given chord is concerned, the root is the obvious choice, but as you say, it won't sound particularly interesting if that's all you play.

Many bass players will alternate between the root and fifth of the prevailing chord (see the example below) but even this will begin to sound tired after a while.

The fact is that basslines need to sound musical and not static - and the bassist plays a very important harmonic role as the note he plays underneath the accompaniment can have a very dramatic effect on the music.

As an example, if we take a chord like D major and put the root underneath it, the result is predictable and sounds like everything is musically 'at rest'.

But listen to what happens if we play the chord with the 3rd underneath; that F# makes an enormous difference and, to our ears at least, softens the effect of the chord considerably. The 5th changes things once again.

But it's not just a simple case of recommending different chord tones underneath the music as a good bass line with appear to flow and not just end up being a series of static notes.

Our suggestion is that you find your bass player some transcriptions of the music he likes and encourage him to work through them, as walking in the footsteps of others is an incredibly good way to pick up fresh ideas.