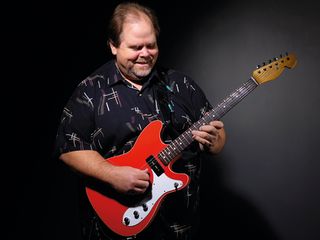 From the GT archives - A minute with a great guitarist is enough to discover what really makes them tick. This time we speak to Texan blues player Buddy Whittington...

One of the first was Phil Baugh - my dad brought home his Country Guitar LP in '66, been trying to learn it ever since.

Actually it was the Silvertone in the '64 Sears Roebuck catalogue, the blue one with the kid in the red blazer playing it. $49.99!

What was the best gig you ever played at?

It would have to be a tie between John Mayall's 70th Birthday Concert and opening for ZZ Top through the mid-western US in 1995 - good work if you can get it!

And how about your worst playing nightmare?

Having to play the Eureka Springs Blues Festival in cut-off jeans, a T-shirt and flip-flops - my suitcase didn't show up! Purty scary for me, and especially the audience!

LISTEN! And stay out of the singer's way.

I try to play something new every day, usually something melodic with cool chords - Redd Volkaert!

Do you have a regular pre-gig warm-up routine?

Usually when I put a new set of strings on, I'll play a little to get 'em stretched out so I'm in tune on the gig.

If you could put together a fantasy band with you in it, who would the other players be - they can be dead or alive?

Ray Charles on piano and vocals, Eldon Shamblin on his prototype '54 Strat, a gift from Leo himself! A guitar owner could learn a LOT bein' around those gents.

Who's the single greatest guitarist that's ever lived?

I think all the greatest ones have been married - somebody had to pay the rent.

Amos Garrett's Midnight At The Oasis solo ranks right up there; he's superhuman. That and Pagey on Heartbreaker - can you imagine just dreamin' that up?

What's the solo/song of your own that you're most proud of?

I'm proud of any of 'em that people remember, and may know the words to.

Being a good husband and dad.