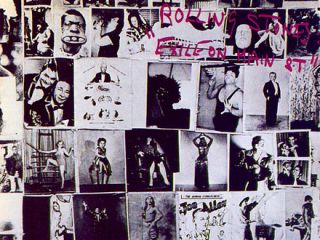 The long-anticipated remastered edition of Exile On Main Street has been released to a chorus of purring from rock critics - and you can read MusicRadar's excellent track-by-track guide here.

Eagle Vision has kindly sent us an advance copy of its new documentary, Stones In Exile - not just a reference to the album's title, but to what Jagger describes as the "Byzantine mess" of their management deal and the crippling 97 per cent tax on their earnings that by 1971, left them with no choice but to relunctantly uproot and take their rock 'n' roll circus elsewhere.

The place they chose was Richards' home, Villa Nellcôte in the Côte d'Azur, and with the aid of their mobile recording van parked outside, the scene was set for the outcasts to shore up and either create, or disintegrate, or a bit of both.

What this documentary offers is a must-see for any Stones fan wanting to vicariously experience that hedonistic, humid, creative hotbed where the Stones' tribe and their supporting cast of musicians managed to decant the magic of a thousand late-night jams into a sleazy, majestic double album that came to be almost universally regarded as their finest achievement.

Exhaustive footage of the band at work and hanging out, interspersed with both great live performances from 1972 concert film Ladies & Gentlemen… The Rolling Stones and French photographer Dominique Tarlé's snapshots, all combine to tell the story of the album's birth.

There's also a bonus featurette where Jagger and Watts return to the record's early Primal Scenes of Stargroves and Olympic Studios, plus some extended interviews.

And when you witness the chaos it was created in, it becomes easier to understand how the ingredients for the album's musical gumbo - of Americana and folk-inflected blues, shot through with Stax sheen and faux-country stylings - took on its ramshackle, chameleonic form.

Guitar highlights from the DVD include hearing the band evolving the groove for Ventilator Blues and jamming on it; Mick 'n' Keef sat around playing elegantly decadent blues; Mick Taylor's slinky, locked-in lead and slide playing…

While the most horrifying part for guitar players is surely the tale of the dealer who made off with eight electric and acoustic guitars, a bass and a saxophone while the entire house was upstairs watching television.

And since all of the Stones contribute their own opinions of the time, along with extra colour from Anita Pallenberg, producer Jimmy Miller, Marshall Chess and many others - what Stones In Exile offers is a more complete vision of precisely why the record has stood the test of time, why every rock critic who reviewed it made a humble U-turn, and why every grimy groove seems somehow possessed less by the spirit, and more by some agitated poltergeist of rock 'n' roll.

Keith Richards indirectly summarises the album's enduring appeal: "Rock 'n' roll is in its most basic sense is a mixture, that's what I've always thought about it. It's a beautiful synthesis of white music and black music… and it's just a beautiful cauldron to mix things up in."

And as Mick Jagger says on the relief of finishing the album: "Finally it's not that thing where you're stuck in a basement trying to work out what the fuck's going on, now it's, We've finished this record - all we have to do is wrap it up in this gritty little package."

Win a copy of Stones In Exile on DVD

To win one of five gritty little DVD packages of Stones In Exile courtesy of Eagle Vision, send an email to guitaristcomps@futurenet.co.uk with 'Exile' in the subject line, and include your name and address. One entry per person, closing date is 31 May and prizes will be sent out by 7 June.