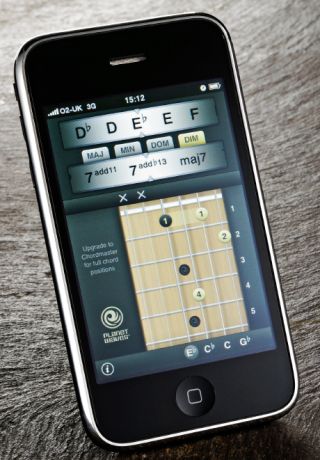 The iPhone is a great learning tool for guitarists

Guitar player and iPhone user? You've never had it so good. But with 185,000 applications now available to buy or download to your iPhone and iPod Touch from Apple's store, finding the best ones is a time-consuming minefield. So let Guitarist show you five of the best to try…

Features:
• Library of 7,800 chords
• Fretboard view of chords with alternate positions
• Allows you to strum virtual strings to hear chord

We can all get stuck in a rut, falling back on the same small armoury of chords. Why not add to your stock? We like the price of this and the fact you can download the light version for free.

The price of Guitar Toolkit may at first seem prohibitive but you get a comprehensive all-in package here, including an accurate tuner that's very useful on the go. Remember that your second or third generation iPod Touch will need a third-party mic or the mic on the included Apple headphones to use this function.

Sonoma Wire Works' app is great for trying out song ideas and another demonstration of just how far digital recording technology has come in recent times. The only downside is the iPhone itself - its mic isn't the most sensitive (don't play too softly when you wake up with an idea at 2am!) and only has one mic, rather than two like most modern mobile phones. The fourth generation model of the phone is set to fix this later in 2010 but this app is still an incredible amount of power in your pocket. In addition, there's a more comprehensive version of FourTrack heading to the iPad soon.

With the established reputation of the physical pedal version already making the software version an attraction, this is widely regarded as the best tuner in the App Store in terms of accuracy. If you're planning on using your phone a lot for tuning, the investment is well worth it. It better watch out though, we hear TC Electronic is bringing its acclaimed PolyTune to the iPhone in the near future…

The tuner isn't the most accurate in the world, the chord library is limited BUT it's free! There's even a few video lessons on the basics. And did we mention it was free?