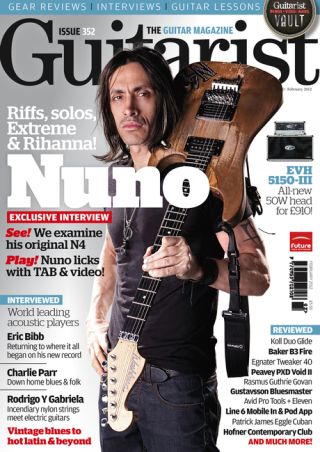 Only in issue 352 of Guitarist…

We chat with the Extreme guitarist about the future of the band, why shredding became "sickening and uncool" and why he's having the time of his life bringing his incredible guitar talents to Rihanna's live shows.

PLUS! We get up close and personal with Nuno's legendary Washburn N4 - a guitar that has been his axe of choice since the earliest days of extreme AND check out the full tab of Nuno's amazing playing on the Guitarist Deluxe cover video (also available on Guitarist Vault) - learn it if you dare…

Rodrigo Sanchez tells us why the Mexican acoustic duo are Havana good time with their latest Cuban -flavoured record.

The Alter Bridge and Creed guitarist takes us through the milestones and highlights of his career to date.

We review three new electrics from the Premier Builders Guild - a collective of boutique guitar makers who have uniquely pooled their resources to enable faster and more affordable production of their ultra-high-end guitars.

PLUS! Check out our review of Van Halen's long-awaited new album A Different Kind Of Truth (sneak peak: we LOVE it!)

Guitarist issue 352, is available now from all good UK newsagents. Non-UK readers can purchase a copy from www.myfavouritemagazines.co.uk, or UK readers can subscribe and receive a free gift!