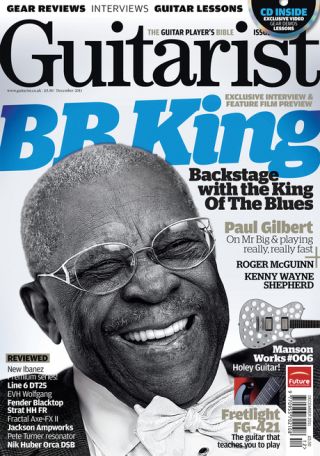 Only in issue 349 of Guitarist…

We sit down with perhaps the greatest living bluesman at the Royal Albert Hall during the making of a definitive new film about his remarkable life. We chat with the 86-year-old legend about how he first fell in love with the guitar, how he's still going strong, the story of Lucille in his own words, and just how long he thinks he can keep touring and playing…

The thinking man's shredder talks about the recent Mr Big reunion, writing a new album together, and what the future holds for him and the band.

The blues-rock maestro guides us through his approach to tone, technique and the guitar in general

The revolutionary digital preamp/FX processor gets a major overhaul - but will it win a coveted Gold Award?

Is this the ultimate single-cut electric? Our in-depth review finds out…

A device that claims it's going to revolutionise the way we learn to play the guitar. Guitarist investigates…

Fender Modern Player Range - a first look at the the new range of reasonably-priced Fender axes, including a return of the mythical Marauder…

Guitarist issue 349, is available now from all good UK newsagents. Non-UK readers can purchase a copy from www.myfavouritemagazines.co.uk, or UK readers can subscribe and receive a free gift!

In addition, Guitarist is available in non-enhanced form from Newsstand, compatible with iPhone and iPad devices (iOS5 required), and also as a digital magazine for PC, Mac, iOS and Android from Zinio