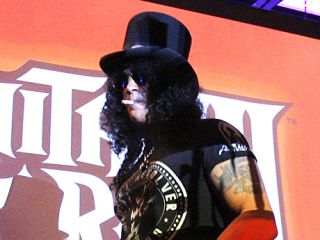 Even though he's been sober for a few years now, and has even given up smoking, Slash remains one of the best - and most dangerous - rock guitarists of recent times.

His live collaborations with Alter Bridge vocalist Myles Kennedy, plus an overwhelmingly positive response to his first solo album, has led to something of a renaissance for Stoke-on-Trent's favourite son, but that doesn't mean we should forget his time with Guns 'N Roses.

He's made no secret pf the fact that he liked a drink or two in his time, but check this solo spot for proof that he always brought his A game to the stage. The clip begins with a bass and drums workout courtesy of messers McKagan and Sorum before Slash chomps on a Talk Box and really lets fly.