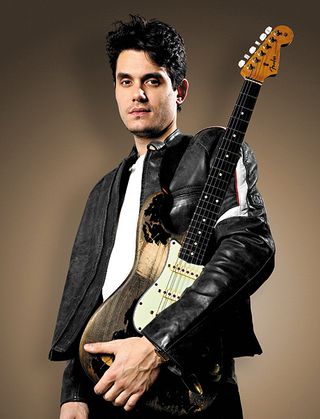 Back in issue 327 we spoke to John Mayer about a great many things, and in the course of our conversation he mentioned that Fender was working on a production replica of one of his favourite Strats, The Black One. You heard it here first, but now Fender has finally taken the wraps off the John Mayer Special Edition 'Black1' Stratocaster.

The guitar was widely used on his superb third solo album Continuum, and this limited edition series (just 500 will be made) seeks to emulate The Black One's key features.

It has similar specs to his current (and fantastic) John Mayer signature model, with the same pickups, neck profile and electronics, but also features natty gold hardware and an exclusive incase gigbag that can be customised using modular accessory pouches and patches.

Unlike Mayer's personal Black One, you'll notice that the Black1 hasn't been artificially aged in any way, and looks rather too pristine at the moment. However, Mayer's thinking behind this was to allow "everyone to make their own trouble on it", and let it get beaten up and worn as you use and abuse it.

Mayer spoke to us in great length about the Black One and let slip the first details of what would become the Black1 Strat when we spoke to him back in issue 327. You'll notice at the end that Mayer hints at a highly-limited Custom Shop version of the Black1, which Fender has yet to confirm - watch this space…

Guitarist: Can you tell us the story of The Black One? We saw a prototype at the NAMM show in January, that looked suspiciously like your guitar…

JM: "That's a really interesting guitar. It was October of 2004 and I'd come off the road after a really long tour on Heavier Things. And I thought I wanna have a little bit of like, a field trip… Y'know? We used to have this show in the US called Mister Rogers' Neighborhood. You ever heard of Mister Rogers?"

"Well Mister Rogers would, every show, go to maybe like a factory where cheese was made, or to the set of a movie, or where they make crayons, or a fisher boat… he would just go on these adventures. And I sort of saw of it as like, I wanna to visit where guitars are made. I want to spend a couple days and I want to watch how these guys do it, and I want to build a guitar - I want to put my own hands on a guitar and I wanna build it.

"So I went down to Corona, California to the [Fender] Custom Shop for two days. Started from scratch, picked a block of wood, y'know, knocked on it - which did nothing but it made me feel like I was looking for tone! Put it on the CNC machine… I mean people were doing it for me, but they'd at least let me do one side of the guitar or something.

"And I put it together, then sprayed it, painted the thing, then left it there and John Cruz distressed it and sent it to me… sounded like shit! Which just broke my heart. Turned out there was a problem with the grounding, the shielding inside the guitar. As soon as it got fixed it was like, waaaaaaa! It was dream-come-true."

What makes the dream guitar, then?

"I'll tell ya' the number one rule about guitars for me is that, I'm so sorry you couldn't get the colour that you wanted, but if you pick up a guitar at a store and it's sunburst, and you hate sunburst, but it feels and plays great for you - lightning strikes - then that's your guitar! As soon as you start getting greedy and you call Fender and you go, I want one like this sunburst, but can you make it blue? The blue one is going to sound and feel terrible. Never in my life has that ever succeeded…

"So to get into that stuff where you want the colour you want, and you want to be lucky enough to have lightning strike twice - it doesn't happen. But [The Black One] just struck. All of a sudden this guitar started doin' it. And as the guitar started to age it got different; within months it started to sound different.

"So it was a labour of love and it's all of the Continuum record. It's in a couple places on Battle Studies, but it really is the Continuum guitar - you know, it's just great every time; it's the best feeling guitar I've ever played."

And the Custom Shop is making some replicas for sale?

"Yep. We'll be offering that to the American people… And the English people of course! They're building 83 of the Custom Shop version, and an unlimited run of the production model; the same sort of specs on the guitar, not distressed. It'll be great; piano black, gold hardware - beautiful."

Did the idea for the gold hardware come from your Stevie Ray Strat?

Read the full Guitarist Interview with John Mayer, only on Guitarist.co.uk