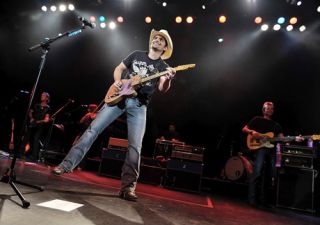 Issue 332 of Guitarist features an extensive cover interview with country sensation Brad Paisley. During our time with Brad, we were also lucky enough to get some time with his tech Chad Weaver, who kindly showed us through Paisley's rig. Here's the full version of our interview with Chad.

Chad, thanks for taking the time to talk to us today. So, please take us through Brad's rig…

"Well the first thing to say is that this isn't the full rig. This is what we'd call a fly-gig/TV show/Opry kind of rig that I've got together. It's the high points of what the main rack is like.

"First, we have two channels of wireless, then he uses an assortment of pedals - 100 delays and one overdrive! I'm using this Empress [Effects Superdelay] so I can get some longer delay times and expand on the amount of delays we use. He likes to tailor each delay for the song. The [Way Huge] Aqua Puss is the mainstay that we use for the slapback, when we were playing She's Everything there are a lot longer delays… Waiting On A Woman, again. He likes to tie the delay in with the meter of the song."

In the main rack, would you use a rack-type delay?

"No, most of it is pedals. The only thing I've got that's programmable like that is a Line 6 M13. We used to use the three rack-mounted ones, the Mod Pro and so on, but they were ruined in the flood [Nashville floods of May 2010]. And I'd already been using an M13 anyway.

"I've also got a compressor here if we decide we want to use one. His favourite overdrive is the [Ibanez TS-] 808 Tube Screamer, and this is the Keeley-modded one. Oddly enough, to be as much of a gear guy as he is, he does not own an original Tube Screamer. His producer Frank Rogers has one and sometimes we use that, but more times than not we just use one of the Keeley ones, on record and out here.

"Down here, we've switched to the Effect Gizmo by RJM. We used to use the [Voodoo Lab] GCX; they do the Ground Control Pro [MIDI foot controller], but this seems to be the new thing, y'know, quieter switching and it sounds pretty cool so we've given that a shot and I'm really happy with it so far."

12 independent loops that you mix as you want?

"Right. I program it so one setting might be, for example, the Dr Z amp with the Aqua Puss; the Bruno amp with the tremolo and so on - some are programmed for specific sounds in songs. When we first started doing The World live when it was a single, it was something like 12 or 14 patch changes for that song - there were four different delays in the solo alone! Yeah, we get a little in-depth with it…

"The cool thing about the Gizmo is that all of the inputs are in series, so I don't have to jump anything. I can turn on the last four loops, which I've got assigned as amp outputs - though as you can see, I'm only using two amps here tonight. We can run four amps at once, where with the GCX I had to go internally and jump all the inputs in series so that I could get the four outputs on at the same time. Then there's send and return for the wah, and an input for the Ground Control Pro which is the footpedal.

"Normally there's [a foot controller] out on stage for him too, actually for two reasons. First for piece of mind - he can change something if he wants to. But second, for me because on our normal gigs in the States there's a lot more distance between me and him. So if I take a guitar out to him, nine times out of 10, he's going to start playing before I get back, or he hasn't stopped playing before I get to him. So I'll use it out there too - pass the guitar to him and doing a tapdance at the same time!"

"The AC30 you can see on stage is from John Henry's along with the rest of the backline, and the guys from Korg [Vox UK distributor] offered to send over a couple of new AC30s. He just wanted to hear them, but he's not using them tonight.

"The Z Wreck, a few years ago, Dr Z and Ken Fischer from Trainwreck had collaborated on an amp for Brad and they went through a couple of prototypes and Brad recorded with it. The first one that Z made, he sent to Ken and he completed it; moved a couple things around, those mysterious things that amp builders do y'know. We don't know for sure, but it might be the very last amp Ken worked on, because he passed away just a few weeks after that. Z made a couple copies to take on the road, and we left that one at home.

"Then just recently, within the last six months or so, Z brought out the rest of the notes that Ken gave him and came up with this and it's amazing. There are four in existence, and there is talk that it could go into production. Z was afraid that it might sound like he was cashing in on Ken Fischer, I mean they were good friends and he didn't want that. But now they're thinking about it, maybe as a tribute to Ken, well, for lots of reasons."

"Then the Bruno Underground 30, Tony Bruno was introduced to us a few years ago - a great guy, a madman amp builder. I've watched him for hours and hours with Brad plugged into an amp chassis on his bench… They'll do that for hours with Tony soldering and changing things.

"So the Underground 30 is his flagship amp. He's very much into the idea of, Okay, this is my base model amp, where do you want to go with it? Voxy? Marshall? Clean or dirty, bright or dark - let's tailor it to you."

Brad's guitars for the UK dates

"They turn gold over time. They have a silver finish on the edges and of course the wallpaper underneath, and you can see where that's wearing here on the back. Every now and then you need to take a needle and some superglue and inject it to stop any more of that paisley coming off."

"We have a '52 Tele. We had one that he'd bought in California - it's the one in the Alcohol video - and it was used in all the shows. It was almost as important as the pink one. Unfortunately it took a swim in the guitar vault in Nashville. There's actually a video of me with a spray bottle of bleach spraying the thing down and rinsing it off which is such an unnatural act, I can't begin to tell you. All of that nasty water got in the wood and the bacteria would have rotted it from the inside out. So when it dried it split, and depending on the humidity of the day it opens, and some days it closes. It'll be a while before it dries out, and it may end up as a paperweight - right now it's a just chunk of wood.

"So this one replaces it - it's got a little bit smaller neck and it's also a re-fin like the old one."

"He had one made, used it in a bunch of shows, and then he decided he wanted to use it as the Water guitar [the video for the single, Water, ironically, involves submerged guitars and amps and a soaking Brad. Steady girls - Ed]. So he had Bill Crook build him a replica, not a working guitar, so it could go in the pool. So that got ruined in the shoot - not that it was a working guitar in the first place - but the real one got ruined too because it was in the locker. So this is the third one. He's getting' good at it!"

"The original of this was one of the early guitars that Bill Crook did for him, it was kind of a charcoal grey paisley: great guitar, used it every night… And it was flooded too. So as soon as I heard about the flood, I called Bill. Y'know, How quickly can we start replacing some of these guitars?

"He had just built this for a customer, and thanks to that guy in Ohio, we had another guitar immediately. He said, Of course - give it to Brad!"

"Albert gave him one, and Music Man gave him one and honestly, I don't know which one was which, but he had a red one and a blue one. Well the blue one was the one on the road… and it was in the locker. So I called the guys at Ernie Ball and they sent another one. So now we have a blonde one and this pink burst with this curly maple cap. He loves their necks, and we use this for She's Everything - it just doesn't sound right on a Tele."

"The last prototypes that we got from Gibson came with vintage-style fretwire and the other had larger fretwire to see which Brad preferred. The one with the vintage wire was lost in the flood, and I'd pulled the other one out to go to the repair shop to have some nut work done to it and it's still there. So they pulled this one off the line and it's better than the prototypes - it sounds great!

"The one in the flood. Well, anything that was glued together… We had two Larrivée D10s. So you pull the cases out, set 'em down and as you took the guitar by the neck out of the case, it just exploded. Every glue joint just gave up. The sides just fell out, the back came off and all of the bracing just came loose.

"The rack case, man it starts coming down the ramp, and as it's coming down, there's about 10 gallons of water pouring out of the bottom. At it has a bottom drawer in it, and there were three guitars in gigbags, so the water didn't drain out of it… There was an '81 Tokai pink Paisley - interestingly they used the same paisley as Fender did in the '60s - a real cool guitar. I think we lost 23 amps and about a dozen guitars, both my road cases. Thankfully pink always goes home - it never gets stored."

• Our kind thanks go to Chad and all of Brad's band and crew for all their help during his recent visit. See the full interview in issue 332 of Guitarist, on sale 3 August