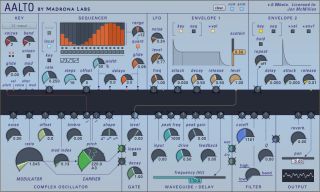 Welcome to the second instalment of The Week in Computer Music, an off-the-cuff rundown of the stuff that's caught our eye over the last week or so...

Aalto is a brand new soft synth from relative unknowns Madrona Labs, and it really stands out with its fantastically forward-thinking feedback-providing interface. What we've heard from it sounds rather good too - we can't wait to subject it to some serious sonic experiments in the CM labs. For now, enjoy this video:

A few weeks back, Avid launched a bunch of Pro Tools|HD stuff - specifically, new interfaces and the HEAT mixer plug-in. That's already old news, of course, but Avid have landed a knockout one-two combo by immediately following up with the Mbox 3 range, announced just yesterday. Oof! Also new from the Avid stable is the range of M-Audio-branded GSR PA speakers - we didn't see that one coming.

We've been getting into touchAble in a big way recently. It's an iPad app that's designed to control Ableton Live 8. Check out some of the features in this video.

Other notable recent releases include bx_shredspread from Brainworx, which is a stereo widener designed for guitars; Blue Cat Audio's MB-5 Dynamix multiband dynamics plug-in; and yet more plug-ins from the unstoppable MeldaProduction, who are this time tempting us with MMultiBandConvolution and MRhythmizer.

Finally, here's the brand new trailer for Frozen Synapse, a nail-bitingly exciting strategic snipe-'em-up from Mode 7 Games. In CM153, we had a behind-the-scenes feature on the game's soundtrack, which is composed by Mode 7's nervous_testpilot, AKA Paul Taylor, who also happens to be a CM contributor. Paul, you've done us proud, lad!