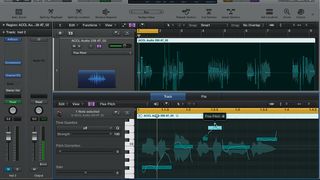 Pitchshifting is, as the name clearly implies, the process of adjusting the pitch of an audio signal upwards or downwards, for both corrective (getting a vocal perfectly in tune, for example) and purely creative (changing the character of a drum loop, say) purposes.

Once an esoteric process involving expensive hardware, it's now a staple technique in music production of all kinds, made perfectly and effortlessly accessible to today's producer by the power of software.

Practically all DAWs now include pitchshifting as a basic feature, but its implementation varies. Some carry it out offline - make your pitch change in a dialog and 'print' it, destructively, into the audio - while others do it in real time, via controls in the main GUI; and some even give you the choice of both options.

Further to that, while pitchshifting of entire audio clips or regions is still the norm in most DAWs, several now offer per-note editing within regions - Logic Pro X's Flex Pitch, Cubase's VariAudio and direct Melodyne integration in Sonar and Studio One, for example.

If your DAW's functionality isn't enough to get the job done, third-party software can take the process to a higher, more involved level. The supercharged likes of Celemony Melodyne and zplane vielklang let you manipulate the pitches of individual notes on a deep level, while creative plugins like Waves SoundShifter and DMG Audio PitchFunk give automatable realtime control of pitch (and more) for a more 'hands-on' experience.

There are two main categories of pitchshifting: tape/sampler-style repitching (aka 'varispeed') and time-independent. The former uses the 'old' way of raising or lowering the playback speed via resampling to push the pitch up and down, just like adjusting the speed of a record player or tape deck. This is also the default method used by samplers to play back audio, though many now offer time-independent methods too.

There are a number of timestretching algorithms available to software developers, often presented to the user as different processing 'types' for use on different source material, eg, separate modes for melodic or rhythmic material. The pitchshifting 'type' you use can cause a big change in the quality of the result you get, but that doesn't mean you shouldn't try them all. Indeed, sometimes the "wrong" algorithm can rough up your audio in just the right way!

An important consideration when pitchshifting vocals is the effect that your processing is having on their formants, which are the characteristic frequencies that need to be preserved to avoid your singer suffering from 'the chipmunk effect' or just sounding weird and 'wrong'. Many pitchshifters have a formant shift control for adjusting formants independently of pitch, enabling pitched-up male/female vocals to maintain their masculinity/femininity, to a greater or lesser extent, depending on the software and vocal in question.

You don't have to restrict your formant shifting to vocals, of course - all sorts of strange effects can be elicited by using it on other types of sound.

Other tools related to pitchshifting include harmonisers, which mix pitchshifted versions of the source signal back in with itself to generate chords and harmonies, and frequency shifters, where the manipulation isn't linear across the frequency spectrum, giving less harmonic/ musical results that are ideal for wild effects or processing inharmonic material like drums.

A brief history of pitchshifting