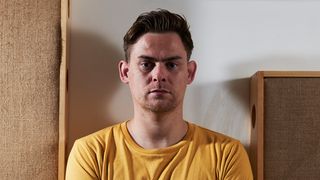 Lynx: "A lot of the techniques I use generally aren't very extreme, but Saturn is a really extreme plugin"

With releases on labels as diverse as Ram, Hospital, 31 Records and Soul:r, Steve Nobes (Lynx) is a truly versatile DnB producer. We set him the challenge of creating some big bad bass sounds, and he set about it with relish, FabFilter Saturn and a clutch of 808 kick drum samples.

How come you opted for 808 kick samples rather than synthesis?

Lynx: "I guess because a lot of my tracks use 808 basses! I just love the sub elements to them, and when you overdrive them, you can end up with really unusual, mysterious things coming out of the top end that you'd never expect."

What is it that makes 808 kicks so special?

"I think for me, personally, it's that it doesn't sustain a single note - it's always moving, and that holds a lot of interest for me. Though sine wave subs are awesome, they're very controlled, and the 808 is like a kick
and a sub at the same time, which makes it really interesting."

Why did you plump for FabFilter Saturn?

"That's easy - because it's absolutely amazing! A lot of the techniques I use generally aren't very extreme, but Saturn is a really extreme plugin. I wanted to keep the whole thing simple, no multiple layers of the same sound playing and just a couple of plugins, so that it was easy to understand. Saturn is ideal for that because it's so powerful. I barely scratched the surface; it's just an amazing plugin."

What else do you use for distortion effects?

"I don't use many others, but I do use bitcrushers to lower the bit depth and create distortion, which I'll run in parallel to the dry signal."

Step 2: Waves' OneKnob Filter is added next. It's automated to close its low-pass filter over the sound, attenuating the signal's noisy high-end and creating a sweeping effect. Steve adds another Saturn after this, to boost the signal's top end, this time less drastically. Both Saturns are set to Warm Tape mode, which Steve feels delivers a good type of distortion for this kind of sound.

Step 3: The second bass is based on a more distorted 808 kick sample. Steve again boosts the tops, this time with Saturn set to four-band mode and the Tone levels adjusted to compensate for some unwanted hiss in the sample. Steve's heavy use of distortion on the third band creates a whistle-style tone in the mids.

Step 4: Another Saturn is added, this time with three bands and less distortion in the highs. Steve reduces the stereo width using Cubase's mixer, and rolls off the highs and the lowest sub frequencies with Renaissance Equalizer. An automated OneKnob Filter again takes off the tops, but this time it opens up again to reveal the tail's resonant mid tones.

Step 5: We've reached third bass and Steve is feeling frisky. He begins with a punchy, clean 808 kick, which he immediately crunches up with a five-band Saturn. The higher mid band is quieter, but its Feedback is turned up, creating a queasy modulation in the mids. Steve fine-tunes the timbre and movement in the sound by tweaking the Feedback Frequency, and decides on a value of 150.14Hz.

Step 6: Another Saturn is added, and the Drive of its highest band is automated to achieve a strong punch at the start of the sound, and a fade towards the end, retaining the natural curve of the 808 kick. Steve dips a couple of resonant frequencies in the mids, then rolls off the extreme high and low end, and automates a band in the mids to rise and fall, accentuating their grungy harmonics.

Step 7: The final bass begins life as an 808 kick, with a bend between 60 and 30Hz at the end of the sound. A five-band Saturn boosts the highs, and the middle band is set to Broken Tube mode, allowing Steve to dial up its Feedback level for some filthy distortion in the mids.

Step 8: Another Saturn is added to bring out the tops of the distortion, but Steve decides against using the OneKnob Filter to sculpt them any further, leaving the juicy harmonics intact. Finally, REQ is applied to ensure there are no extreme lows or highs present in the signal.