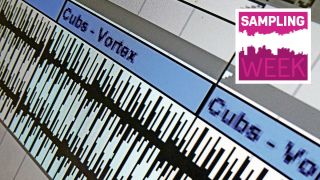 In this tutorial, we'll start slicing away at our freshly warped track, creating an extended intro and a shortened breakdown to make the tune easier to mix. Chop chop!

Step 1: If you haven't completed Basic warping in Ableton Live tutorial already, load WIP edit.als to get up to speed. Vortex's intro isn't very long - a mere 16 bars before a 32 bar breakdown. Unfortunately, the intro features a pad with a gradually opening filter on it.

Step 2: We need to find a section we can loop without it sounding too unnatural. Drag over bars 1 to 9 on the clip, and press Ctrl/Cmd+L to loop the section. Play the project back. This loop doesn't segue very smoothly: the filter movement on the pad is too obvious.

Step 3: Let's try a shorter section instead. Move the loop start to bar 5 instead. The four bar section doesn't sound too shabby! Drag over the clip from bar 5 to bar 9 and press Ctrl/Cmd+Shift+L to duplicate it four times, giving us a 32 bar intro.

Step 4: This edit won't sound too incongruous in the mix, so let's roll with it. While we're at it, let's cut that big breakdown in half. Drag over bars 33 to 49 and press Ctrl/Cmd+Shift+Backspace to 'delete time'. Now the intro goes straight into the second half of the breakdown.

Step 5: This sounds okay, but we miss the big booming crash at the start of the breakdown. We can smooth the transition using Live's fades. Select Fades in the Track Title Bar, and drag the Fade In Handle at the top right-hand corner of the intro clip, and drag it to the right so that it sits at about 33.3.4.

Step 6: This is a long enough fade for us to hear the crash, but short enough so that we don't hear any of the spoken word vocal that plays shortly after it. We've completed our simple re-edit; now all we need to do is highlight the entire track and select File > Export Audio/Video to bounce it out.