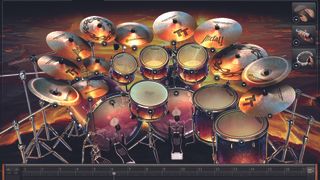 The thunderous, chest-battering sound of double bass drums has been part of the drumming vocabulary ever since big band legend Louie Bellson popularised the addition of a second kick to the drum kit. These days, the technique is primarily employed by drummers in the harder of rock and metal arenas, but it's not uncommon to hear those impossibly fast runs and fills in jazz, fusion and other styles too.

Programming double kick drums in a DAW isn't that difficult, but if authenticity is your aim, you do need to be aware of the sorts of patterns and figures a real drummer might use. You don't just have to hammer out constant 16th-notes either - the effectiveness of double kick drums can be due to the spaces between each flurry of hits as much as the hits themselves.

For maximum realism, you'll ideally use a drum kit ROMpler with separate sample pools for left and right kick drums, such as Toontrack's Metal! EZX for EZdrummer and Superior Drummer 2. If you don't have such a library, you'll need to double up on a single kick drum multisample, which is a perfectly acceptable fallback. You'll also often want to keep the velocity of all hits at maximum (or some other fixed value), emulating the sample triggering that's now a metal production standard.

Step 1: We've got a busy kick drum pattern in bars 1-4. For the next four bars, we've filled in most of the gaps with more kicks. EZdrummer's Metal! EZX expansion alternates between left and right kick drums - each drawing on its own sample pool - with every C1 or B0 note it receives.

Step 2: That's pretty hardcore, but to drive our metal groove along, we really need some triplet rips in there, too. Switching our DAW to a triplet grid makes it easy to draw in 16th-note triplets at a couple of suitable points in the phrase. Velocities are all at maximum, needless to say, and everything is snapped to the grid.

Step 3: Metal! EZX uses two kick sample sets for subtle variation, but you can switch to just one to bring more consistency - desirable in modern metal productions, which often actually use triggered, non-layered samples, rather than mic'ed up drums. Click the menu button for the kick you want to disable and select None.

Step 4: Disabling EZdrummer's Humanize system restricts the engine to using one fixed sample for each velocity level, with no round-robin variation, making every kick hit identical, for machine-like consistency. However, the other drums are affected too, so a duplicated, kick-only EZdrummer instance comes in handy here.

Step 5: You'll generally want your two kicks to be a matching pair, but interesting textures can be had by mixing them up. In EZdrummer Metal!, simply make your selection from either kick drum menu. The engine allows for alternating single or double-strokes between the two drums.

Step 6: Double kick drums are very much embedded in the metal genre, but that doesn't mean you can't give them a try in electronic styles. You probably won't want the relentless machine gun effect demonstrated thus far, but try throwing in the odd double kick fill and playing around with velocity levels for variety.