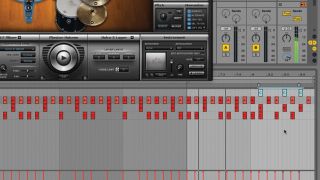 Let's take a look at how to create drum beats in the style of John Bonham, taking our cue from his performance on Led Zeppelin's 170bpm Rock And Roll - the quintessential balls-to-the-wall vintage hard rock drum track.

The frenetic percussive barrage is unfussy and powerful, with more kick drum hits than most other drummers would ever have had the nerve to go for. Before the main track even gets started, though, there's that stunning intro…

Step 1: If you've ever found it difficult to pin down the bar lines in Bonham's bonkers lead-in, it's probably because it doesn't start on the downbeat of bar 1, but in between beats 3 and 4 of bar 'zero', so we'll start our intro in the same place. After the first three hits, though, it's four full bars of simultaneous eighth-note half-open hi-hats and snares with interspersed syncopated accenting.

Step 2: Bonham was a very, very big hitter, so make sure you use your 'hardest' snare articulation for the accented notes, and a regular one for the in-between, unaccented hits. The easiest way to program a Rock and Roll-esque intro is to get the snare sorted, then copy the notes to the hi-hats, since the velocities are the same for both. You may need to turn your hi-hats up, too, depending on your sound source.

Step 3: The song's main groove contains many variations in the kick drum part throughout the track, but Bonham's basic approach here involves hi-hats played half open all the way through, with the emphasis placed firmly on the beat - so alternate between full and two-thirds (or thereabouts) velocity to create a similar hi-hat pattern in software.

Step 4: Bonham was renowned for the power and speed of his right foot, and the extended runs of eighth-note kick drum hits are definitely out of the ordinary - the sort of thing that could easily overwhelm a lesser track. Try programming them in around the snare to create a Bonham-style fast-paced rock groove. The snare, meanwhile, should simply hammer out a straight-up backbeat.

Step 5: For the snare fill at the end of the verse, Bonham cleverly harks back to the intro, so we'll do something similar, using a funkier, off-beat pattern of snare hits to break up the groove. Alas, we don't have space to delve into the legendary solo at the end of the track, though - you'll have to figure that one out for yourself!

For more tips and tutorials on emulating classic beats and grooves, pick up the May issue of Computer Music (CM229).