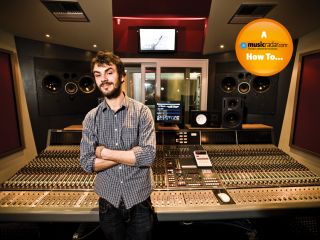 Matt Wiggins is an assistant engineer at Miloco Studios in London. After studying music technology at Salisbury College, Matt went on to work at Studio 360, just outside the city, for a few years.

He completed his first year at uni studying popular music and record production, then over the summer holidays undertook some work experience at Miloco. After a short time, they offered him a job.

In the two years since, he's worked on sessions for Florence And The Machine, Jack Peñate, Bloc Party, Spandau Ballet and Editors, as well as collaborating with a host of top producers, including Paul Epworth, Ben Hillier, Gil Norton and Guy Massey.

Why did you want to be an engineer?

"I was moments away from taking the sensible option and studying maths and English at college but I'd always enjoyed listening to and making music, particularly the technical aspects of it. On the day I was supposed to begin my course I visited a different college to look at their music tech department, and the rest is history.

"From there working in a studio just seemed like a natural career choice for me. I always listen to my favourite records and try to emulate a particular sound or style of mix and it frustrates me when I can't do it, so it's great to be able to get in there and watch, read and study what's going on.

"Initially it was never an intention of mine to be a producer - I was more interested in the sonics - but the more I work, the more production appeals to me as an option."

How did you land the position at Miloco?

"I wanted some summer work experience so I handed out my CV to seven recording studios, including Miloco, which was suggested by the engineer at Studio 360. About three weeks in I was due to go back to uni when they offered me a job. I started on sessions in some of their smaller studios and gradually progressed."

What qualifications did you have?

"I'd worked in a café in a large supermarket, so that's really where I cut my teeth (and burnt my fingers) making industrial quantities of tea. After finishing my college BTEC course I was lucky enough to have a studio pretty much on my doorstep in Wiltshire.

"The second I finished college I knocked on the studio door and it turned out that the previous assistant had left the day before! I worked there for about two years, and I made some good contacts and great friends.

"During that time I also worked as a sound engineer at a club in Southampton, played bass in a band, and ran DnB and hardcore nights in Salisbury with friends."

What are the best and worst bits about your chosen career?

"I'd say the best bits are working with people that I admire, whether that's musicians, engineers or producers. Buying the CD in the shops at the end and knowing you played a part in it is a good feeling.

"I think the worst bit has to be the hours - we pretty much carry on until we've finished, so that can sometimes mean working all day and night, 70-to 80-hour weeks, and it doesn't leave much time to do anything else. To be fair, it has been this way since I started, so you get used to being a social recluse."

How does the average work day pan out?

"A few days before a session I contact the engineer and find out if there are any special requirements, such as tape or extra equipment. On the day, I arrive one hour before the session begins, usually about 9am, or earlier if it involves a string section or film crew.

"I start by checking that all the multitrack outputs (whether from Pro Tools, Logic or a tape machine) appear on the desk at the correct level, and then do the same with the inputs.

"From there it depends whether I'm doing a tracking or mixing session. If it's mixing, I check the recall sheets used to note down the outboard settings and load a fresh disk into the desk to save the mixes onto. Throughout the day I patch in any equipment the engineer needs, note settings, occasionally operate the multitrack, save mixes and offer opinions when asked.

"For a tracking session I set up headphones, mics, baffles, amps, pianos and synths, and generally make sure everything goes smoothly.

"In addition to this there are vast amounts of tea and coffee to be made, the production or organising of lunch and dinner, light maintenance and keeping the session sheet filled in with studio time used and any other information to do with backups and the like. Sessions are usually 13 hours long, but have on occasion gone on for several days!"

What are the essential skills needed to work on music-related projects?

"One of the most important things as an assistant engineer is attitude. It doesn't matter how much you have in the way of experience, knowledge or qualifications - if you're arrogant and not very easy-going, not many people are going to want to spend 15-hour days in a small underground room with you!

"It's a producer's job to bring to the table an idea or vision about what the artist is aiming for and help to steer the project towards that within the budget or timeframe allowed. He has to be flexible and willing to try ideas that may not initially seem like the best way to go, but also act as a quality control over the project. This can sometimes get a bit tricky - lyrics and music are obviously highly personal things, so it has to be approached very tactfully.

"Just being open to trying ideas out, however wacky they may seem, will always add to the session. By the time you've spent 20 minutes arguing over why something will or won't work, you could have actually tried it out.

I think it's important to experiment, both technically and musically - mics in bottles, mixes through Leslies, using second-hand compressors that cost £5, or even doing vocal takes swinging from a rope hooked to the studio ceiling…"

Has the inexorable march of technology enhanced your job, or made it more difficult?

"There are pros and cons. One of the pros is definitely the 'Undo' button, which has saved my bacon many times! There simply isn't such a button on a tape machine!

"More people are mixing mostly inside the computer these days, and being able to instantly recall a mix in Pro Tools saves a lot of time, as you can work on one song, swap to another and then go back to the first one all in a few minutes. It is possible to do this using the desk and outboard, but you have to allow an hour to recall the settings and so on.

"On the negative side, there are endless choices, endless playlists, seemingly endless plug-ins… sometimes too much choice is bad. I've lost count of the number of times a session has gone off on a tangent for an hour, only to end up exactly where it began.

"Having said that, the quality of some plug-ins now means that for certain things it is possible to achieve good results with a minimal amount of equipment."

"Fairly basic, but it can add up purely because of the amount of hours you work. It was tough at the beginning, but these days I can afford to live in London."

Any tips for aspiring engineers?

"Listen to what the instrument is doing in the live room. If it's wrong at the source, it's not going to get any better. There's no point having a great recording of a badly tuned drum kit.

"Also, take notes - I try and write down as many details and settings as I can because you never know when you may get asked what pedal was used to get that bass sound on the third Thursday of last January.

Dream of a career as an assistant engineer? Get the brand-new Computer Music Special: How To Make It In Music, out now, to find out how to make it a reality.