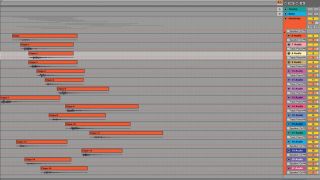 Ever since the earliest days of rock and roll, the sound of two human palms being brought together has played a significant role in popular and dance music. The handclap really came into its own with disco, then techno, house, R&B and other electronic styles, thanks to its inclusion as a sonic option on just about every drum machine ever made, from Roland's series of x0x-boxes to AudioThing's awesome Hand Clapper plugin.

As ubiquitous as the electronically generated clap remains, though, making your own using recorded samples is both easy and satisfying - and with handclaps being rough and top-heavy, you don't even need a high-quality microphone to do it.

The key to a good homemade handclap is making it sound like you've recorded a load of people in your studio, clapping together, with all the natural variation in sound and timing that such activity would inevitably produce. In this tutorial, we'll show you two methods by which to rustle up your own personal claps in no time at all, shifting start points and pan positions to achieve exactly that 'human' feel.
Next time you find yourself reaching for that 808 handclap, take five minutes and see if you can't come up with an original alternative of your own…

Step 1: First, record yourself clapping into a microphone several times - we've just used the built-in mic on our laptop. Vary the positioning of your palms and fingers between claps, so that each one sounds a bit different. The goal is to create a stack of claps that sounds like lots of people clapping together. We've gone for 16 of them!

Step 2: Now we need to separate the claps and save each one as an individual audio file. Work through the recording, cutting every usable clap out of it and moving them onto a separate track in your DAW before bouncing them as new samples, or simply saving them as separate files in your audio editor.

Step 3: With your folder of recorded handclaps, you now have a couple of options. The easiest is to stack the claps on a series of tracks in your DAW, then bounce the whole lot down as a single hit. The benefit is that your huge clap is boiled down to one sample; the downside is that you lose flexibility…

Step 4: Timing is everything with handclaps. If your slices all start at the same time, you get a very short, not-at-all-funky, very loud single clap. Stagger the start positions of the samples a touch to 'smear' the sound, and pan each one to its own space in the stereo field. Now, render your final clap and import it into your drum sampler.

Step 5: The second option is to build patch in a drum sampler, giving control over the volume, panning and processing of each layer from a single interface. Here, we've loaded all 16 of our claps into 16 cells of Battery 4 and programmed a stack of notes to trigger them together, with offset applied manually to spread the claps in time.

Step 6: Now, not only can we mix the levels and adjust the pan positions of all 16 claps in one instance of Battery, but we can also use the plugin's reverb, filters, compression, envelopes and other sound shaping and processing controls. Saving our Battery kit gives us a flexible handclap instrument for use in future projects.