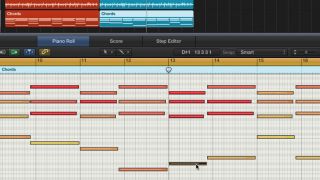 Get ready for an easy arrangement win: through the mere nudging around of a few low notes, you can transform your chords and turn one song section - a verse, say - into another - a chorus, for example. Read on to learn how it's done…

Step 1: It's possible to fashion new song sections from existing ones simply by changing the bass note under each chord, effectively creating new chords. To illustrate, here's an eight-bar section containing a basic progression made up of alternating Cm and Fm chords. The left-hand part is currently just playing the root note of each chord: C for Cm and F for Fm.

Step 2: We copy and paste the section into the next eight bars to make what will eventually become a chorus part. Then, leaving the top three notes of each chord exactly as they are, we can start moving the bass notes around to make new chords. The first C note can stay as it is, but our first victim is the F beneath the first Fm chord in bar 2.

Step 3: We change it to a Bb, which sounds good and fits well. Our original F minor contained the notes F-Ab-C, the first, third and fifth notes of the F minor scale (F-G-Ab-Bb-C-Db-Eb). Adding the Bb means our chord is called an Fm11, because if you keep counting past the octave to the Bb, its the eleventh note. Our Fm11 chord reads Bb-Ab-C-F.

Step 4: The bass note in the third bar moves from C to Ab, making an Abmaj7 chord (G-C-Eb from the C minor chord, coupled with the new Ab in the bass). As with the previous Fm11, our chord appears in spread or 'open' voicing - Ab-G-C-Eb - rather than the 'closed' voiced Ab-C-Eb-G. Similarly, we then shift the F in the next bar down to Db to make Dbmaj7.

Step 5: The C bass note in the fifth bar becomes an Eb, making what's known as merely Cm with an Eb bass, or Cm/Eb. As it happens, the F in bar 6 can remain where it is, since Fm works well as the next chord in the progression. The pattern that's emerging now in the left-hand piano part - that is, the bassline - is an ascending part from the low Db back up towards where it started on C2.

Step 6: Finally, we change the C bass note in the seventh bar to an Ab, making another Abmaj7 chord with the same open voicing as the one in the third bar, and we shift the final F in the eighth bar to a high Db to create another Dbmaj7 chord. The result is a more musically interesting section with a more defined, 'fall and rise' shape that takes the listener on more of a musical journey.