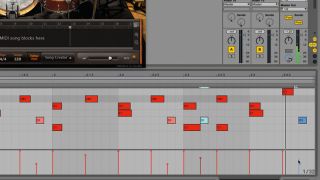 Ghost notes are incidental notes played in between the main beats of a drum pattern in order to drive it along and increase its sense of locomotion. Theoretically, they can be played on any part of the drum kit, but in practical terms, when we talk about ghost notes, it's almost always in reference to the snare drum, which a drummer learns to semi-consciously ghost on the 16th-notes in between eighth-note hi-hat strokes as a matter of course, since their left hand is already in the right position to do so, and it makes just about any groove sound better.

The main thing to bear in mind when programming ghost notes is that they need to contribute to the groove almost intangibly, rather than being obvious or dominant. They should fill the spaces between the beats subtly and not come across as beats in themselves. So, if your ghosts ever start to sound overbearing, turn them down and/or thin them out.

In this walkthrough, we'll show you how to add ghost notes to a simple drum loop, then refine them to make them sound as close to the performance of a real drummer as possible.

Step 1: Here's our basic two-bar groove, with the snare on the backbeat and no ghost notes. We're using EZdrummer 2, which offers multiple velocity layers - a must for any realistic drum kit emulation, especially if you're programming ghost notes, which aren't just quieter than the main hits but have a different tone, too.

Step 2: To demonstrate just how effective ghost notes can be in transforming a groove, we add just a single one, positioned on the last 16th-note of the pattern and serving as an anticipatory 'skip' into the next two-bar phrase. Ghost notes need to be quieter and lower in velocity than the main hits, so we've set this one to 79.

Step 3: The more ghost notes you add, the 'busier' it will sound. Here are two versions of the phrase. The first is relatively restrained, while in the second, we've gone all-out, for maximum propulsion! We're sticking to a quantised 16th-note grid here for clarity, but you can also go 'off the grid', of course.

Step 4: Our ghost notes so far have all fallen off the beat, in between hi-hat hits, which is the 'natural' way for a drummer to play them. However, by following an offbeat ghost note with another one on the beat, you get a different feel. For realism, avoid three or more ghosts in 16th-note succession, though.

Step 5: Our ghost notes are all set to the same velocity, and EZdrummer's round-robin multisamples do a good job of varying their sound. However, varying the velocities somewhat will replicate the dynamics of a real player - all you have to do is lower a few hits in velocity from your baseline level a touch, and raise others.

Step 6: A drummer will often press the stick into the drum head rather than strike it cleanly - called a "buzz roll" or "press roll". To mimic this, replace some single ghost hits with two or three very quiet notes in rapid succession. Turn Snap off in your DAW to experiment with the timing and get it just right.