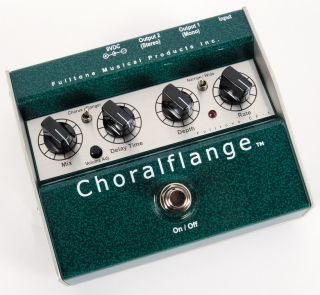 Unlike reverb and delay effects, all the respective types of which are merely variations on a theme, modulation effects are connected in the sense that they all share a common element - namely, they involve some type of modulation. In other ways, many modulation effects can be quite different. So what's it all about?

Well, modulation, in production terms, simply means using one parameter to control another. In practice, with effects, this almost always involves using a Low Frequency Oscillator to exercise said control, although there are some exceptions. If 'modulation effects' is simply an umbrella term for a variety of different effects, then here is an explanation of the main types:

Legend has it that chorus was invented by Roland in their Jazz Chorus amplifier. The amp sent a dry signal to one amp and speaker, and the same signal was delayed, modulated and sent to another amplifier and speaker within the same cabinet. This is a good explanation of how chorus works - except that instead of feeding two amps, in a modern plug-in the two signals are combined. The second, modulated signal is not only delayed but also pitchshifted slightly, and an LFO controls the modulation of this pitch and thus the character of the effect. Originally intended to simulate the sound of more than one instrument or vocal part, it soon became apparent that it didn't, and now chorus is simply used as a creative effect.

The terms phasing and flanging have become confusing over the years, largely because the effect we now call flanging was originally called phasing and the effect we now call phasing is rather similar to flanging. The concept of flanging stems from running two synced tape machines (playing the same signal) and manually slowing one with your finger (and then the other). This created a distinctive whooshing sound. Phasing, on the other hand, is similar, but without the fast changes and whooshes. In both cases, as the two signals move closer (phasing) and further (flanging) apart, some interesting frequency cancellations occur as similar or identical frequencies cancel each other out or build on each other. Dynamic variation to these effects can be produced with an LFO controlling the timing and intensity of the modulation, and in the case of flanging, the effect is intensified by feeding some of the wet signal back into the equation.

Ring modulators are tricky to understand, but very simple to use, fortunately. The basic concept is that two signals are brought together and then the sum and difference of the frequencies of both are generated, while the rest of the signal is removed. So if you had a 500Hz sine wave and an 800Hz sine wave, the output would feature tones at both 1300Hz and 300Hz. Of course, real sounds are much more complicated than that, and it would make your head explode to figure out on paper what this actually produces when two complex signals are combined.

If you reduce the delay time in modulation effects down to 10ms or less, it's difficult to distinguish between the original and delayed signal, and so you can then get on with the

business of creating tremolo and vibrato. Variations on a theme, the basic difference is that the latter involves modulating the pitch of a sound, the former the volume. Things get a bit more interesting when you offset the left and right channels of a tremolo so that as one peaks the other's at its lowest point, thus generating either synced or LFO-driven panning, the use of which should be self-explanatory!