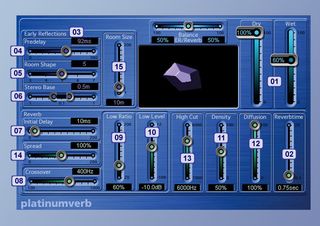 Reverb is the product of sound interacting with nature. Every time we make a noise, it's transmitted as waves of vibration through the air. These waves ricochet off every surface they encounter, before finding their way to the listener's ears. Check out our reverb masterclass tutorial if you want some nuts-and-bolts pointers, or read on for a more in-depth look.

Because we're so used to hearing these sonic reflections, any situation in which there's nothing for the sound to bounce off sounds unnatural. With this in mind, successive generations of music productions have used a variety of ingenious processes to recreate these reflections, culminating (for most of us) in digital reverb units in the shape of plug-ins.

There's never been a better time to explore the possibilities your reverb plug-ins throw up, which makes it all the more surprising that the vast majority of us do little more than call up our favourite reverb and insert it into any channel we need. This is a real shame, as almost every space you encounter will have a distinct sonic character.

Clever use of reverb techniques can transform your mix from a lifeless lump of deadwood to a vibrant masterpiece.

Spring
In the pre-digital age, the only way to synthesize the sound of reverberation was by mechanical means, and this generally meant spring or plate reverb. Spring reverb is a simple concept; usually found inside analogue guitar amps, it involves suspending springs between pairs of transducers with vibrations being generated at one end and received at the other. The effect, while interesting and often useful, is fairly unrealistic, and the vast amount of gain required to boost the received signal makes it prone to extreme signal noise.

Plate
Plate reverb is similar in principle to spring reverb, in that real vibrations are induced in a real piece of metal by a driver and then picked up by microphones. The difference is in the quality of results; plate reverbs can sound absolutely lush (albeit in a not-quite-natural way). Originally the preserve of top-end studios, they're surprisingly cheap and easy to build, although with an average size of 4ft x 6ft, they aren't exactly practical.

Digital
Although this is a slightly oversimplified description, let's just say that digital reverb is usually achieved with a combination of very fast delay algorithms and filters. If you've ever wondered why reverbs are among the most processor-intensive effects you can use, then you must not know that to create even a modest sounding digital reverb, said algorithms must churn out anywhere from 1000 to 3000 delays every second. And they must impart clever randomisations of timing between each one so that the effect isn't completely unnatural.

Convolution
The daddy of modern digital reverbs, the convolution reverb uses painstakingly accurate sonic models of a specific and real acoustic space, so that any sound to which it's applied appears to be playing in that environment. For example, in the room you're currently sitting in, a series of specialised sounds would be played and recorded with a variety of mics. Using clever calculations and deductions, a sonic blueprint (called an impulse response or IR) would be made so that any sound fed into it would appear to be interacting with exactly the same environment, taking into account every table, chair, window, sofa - even you, if you happened to be in there when they took the blueprint.

The anatomy of a reverb

Click 'see all pictures' in the picture box for an annotated diagram of a Logic's 'platinumverb'. Explanations below.

01. Wet/dry - This specifies the amount of clean signal versus effected. If you're using your reverb as an insert, this will be used to control the intensity of the effect, but in a send/return loop, the normal setting will be 100% wet, with the send level of each track determining the intensity and amount of reverb on each.

02. Reverb time - It's hard to say at what point reverberations actually stop, so the reverb time (aka decay time) is accepted as being the time it takes for the reverberations to decay by 60dB. Longer equals bigger sounding, with normal rooms in the 1-3 second range and huge spaces like cathedrals dishing out ten seconds or more.

03. Early reflections - When a sound is produced, there's a slight delay (perceptible or not) before it encounters a reflective surface. Consequently, smaller rooms will generate early reflections that are audible before being lost in the reverberant mush that follows. The brain makes an educated guess as to the size of a space based on these early reflections.

04. Pre-delay - The amount of time between the original sound and the early reflections. Too short and you lose definition, too long and there's an audible gap (such as in a very large space), generating an echoing effect. As a rule of thumb, try to achieve the longest pre-delay time you can without an audible gap.

05. Room shape - Many reverb units include a room shape option, usually determining the number of walls, but sometimes also their placement.

06. Stereo base - Some reverb designs enable you to simulate the placement of stereo microphones. To accurately mimic the perception of a real room, try placing them around the same distance apart as your ears.

08. Crossover - Because bass reverb can overpower a track quickly, some reverbs enable you to set the bass and mid/treble reverb times independently - the crossover setting in this type of reverb will determine at what point the signal is split.

09. Low ratio - The low ratio control is essentially a reverb time control for the bass end - in this case expressed as a percentage of the main reverb time.

10. Low level - If your reverb enables you to split its action, it will usually have a low level control so that you can set the level of the low reverb effect independently - in this case, a setting of 0dB means the levels of both the high and low bands are equal.

11. Density - This controls the amount of reflection, and essentially sets the thickness of the reverb. This should normally be as high as possible without colouring the sound.

12. Diffusion - Diffusion controls alter the regularity of the individual reverb delays (of which we've established there are thousands per second). High diffusion values mean more irregularity and, therefore, greater realism.

13. High cut - High frequencies tend to get absorbed much more quickly than low frequencies, so in nature reverb tends to lose top end much faster than bottom (except in stone or other highly reflective environments). A high-cut (also known as 'damping' in many units) filter simulates this effect.

14. Spread - Natural reverb is an unruly thing, so it can be very difficult to detect much in the way of direction from it. Nevertheless, clever algorithms that offset the early reflections and longer reverberations as they play through the left and right channels can be used to add stereo width to even a mono signal. Some convolution reverbs, such as WizooVerb W5, can accurately model three-dimensional spaces in glorious 5.1 surround...

15. Room-size - Determines the size of the virtual space created by your reverb plug-in.