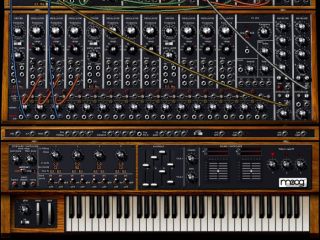 Relax: not every synth looks as intimidating as the Moog Modular V.

Anyone can turn on a synth (or install it) and play the presets, but knowing how its sounds are actually created is another matter entirely.

These days, there's no need to spend hours reading sound design textbooks, but getting your head around the basics of synthesis will enable you to make a start at programming your own patches and pick the right synth for the job at hand.

Here, then, is a brief guide to the six most popular synthesis types, plus a quick rundown of some of the other methods you're likely to come across.

Let's start with that most popular and familiar of all synth types: analogue - or rather, its modern virtual equivalent.

Analogue synthesizers are usually of the subtractive variety, meaning that they start with a waveform that's rich in harmonics and then take away frequencies from it using one or more filters.

More often than not, the initial waveforms are very simple, which means that an analogue instrument is unlikely to be your first choice for, say, a realistic nylon-string guitar or acoustic piano. However, it's this very simplicity that gives analogue sounds the power to cut through in a full mix.

From thumping basses to screaming leads, the analogue synthesizer makes its point clearly, concisely and emphatically. There are plenty of virtual analogues around, ranging in price and complexity, from numerous free offerings to Arturia's stunning Moog Modular V.

Sample-based synthesizers (aka ROMplers) also make use of subtractive techniques. However, rather than starting off with a simple analogue soundwave, they draw upon large collections of samples, which are then filtered and modulated to create new patches.

Obviously, this sort of instrument is the ideal choice for any acoustic sounds you might need, but don't overlook its usefulness for more abstract things as well. Refer to Cakewalk's Dimension Pro for an excellent example of sample-playback synthesis.

Closely related to its sample-based cousin, the wavetable synthesizer also draws upon samples, though in this case they're very short snippets, strung together in sequence and modulated in imaginative ways.

Wavetable instruments excel at spiky, digital basses and motion-filled, evolving pads. The PPG Wave 2.V from Waldorf is a gorgeous recreation of a legendary hardware instrument, while Siegried Kullman's SQ8L is a stunning clone of another classic

Additive synthesis is, as the name suggests, the exact opposite of subtractive. Rather than starting with a waveform, such as a sample or square wave, an additive synthesis patch is built up from loads of individual sine waves - which can be extremely tedious work.

If you need clear, detailed and precise percussive sounds, then an FM synthesizer should be on your short list. These instruments create their tones via complex modulation of simple waveforms.

FM programming is not for the faint-hearted, but when you need a woody marimba or crystalline bell, it's pretty hard to beat. Native Instruments' FM8 is arguably the final word on FM synthesis, though you can also avail yourself of the freely downloadable Vivaldi.

Physical Modelling instruments, such as Applied Acoustics Systems' Tassman, attempt to mathematically recreate the subtle nuances of acoustic instruments by simulating the behaviour of the various components that create them (for example, the interaction of a stick and a drum head).

It goes without saying, then, that they're excellent (if somewhat CPU-hungry) sources of percussion, plucked string instruments and other acoustic timbres.

Various hybrids of the above can also be found, along with more esoteric and experimental synthesis types, such as granular, phase distortion (very similar to FM) and scanned, to name but a few.

However, these can be considered specialty types that, while not an necessity for your musical toolbox, are worth investigating should you feel the need for something more 'out there' sonically.

A great example of a hybrid synth is Spectrasonics Omnisphere.