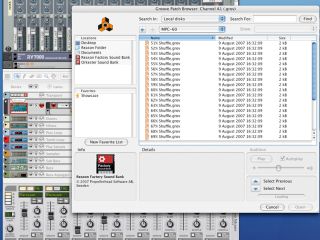 We´ve all been there - sitting in front of a blank DAW arrange page, desperately trying to come up with something to fill it. Getting started can sometimes be the hardest part of the music making process.

Fortunately, if you are struggling for inspiration, there are plenty of things you can do to kickstart your creativity. Here are a few of MusicRadar´s favourites…

1. If you´ve imported a REX file into your sampler, try shortening all of the notes and then using the release time to tweak how much of each individual slice is played. This way you can really take control of the loop´s vibe.

2. Don´t ignore the power of groove quantising. If your sequencer lets you create your own groove maps and templates, get hold of the groove maps for the Akai MPC 60 (freely available as MIDI files on the internet) and apply them liberally!

3. Two sounds layered are often much better than one. Can´t figure out why your synths aren´t as phat as those that you hear on your favourite tracks, it´s probably because you´re actually hearing more than one.

4. Most synths come with a handy supply of crazy LFO-driven presets that don´t really seem to serve any practical application. They do, though: effects. Try putting a low-cut filter and tremolo on one and playing with the LFO rate to hear how useful they can be - particularly with a bit of delay added.

5. If you often find yourself stuck for accompaniment parts, get your hands on an arpeggiator. Simply feed the held notes from your bassline in and it´ll throw out an in-key accompaniment. Struggling with the bassline? Start with an arpeggio-generated one.

6. Never overlook the usefulness of loops. They´re a fantastic route to inspiration. If you´re worried about sounding unoriginal, simply layer a few and chop them up finely, then just use selected hits from each one and apply your own quantising and effects to them.

7. You can turn almost anything into a bit of percussion if you EQ it right. For example, little breath sounds can be excited, gated, chopped and sequenced to emulate a snare, make a hi-hat substitute or just work as a non-specific rhythmic element.

“If you often find yourself stuck for accompaniment parts, get your hands on an arpeggiator.”

8. When you come to make a track, play to your strengths. If you´re a musician, start your tracks on your instrument of choice. A DJ? Scratch vocals or sample a classic break. A vocalist? Write some lyrics. Don´t just sit staring at the screen, waiting for inspiration to hit.

9. Music production is a numbers game, so play the numbers. Make sure you constantly come up with new tracks and ideas, because even the best in the world only have a limited percentage of brilliant output. If you get bogged down polishing average turds, you´ll never lay those golden eggs.

10. In these days of fancy plug-ins and emulations, it can sometimes be more fun and inspirational to actually do things for real. For example, if you want the sound of a telephone, then stick a mic next to your phone´s earpiece, call it and speak…

11. If you´re really stuck for inspiration, copy a riff you like and begin building a new track behind it, then drop the riff when you have a few nice parts of your own. Just be careful not to fall in love with the original riff, as that would be a bootleg, not a track!

12. Use different tools for different jobs. In days gone by, there was a separate machine for every job; now we often do it all in one bit of software, seduced by the convenience of it all. Instead, use Reason for drums, Live for loops, ReCycle! for chopping, Guru for craziness - and anything else you have. Don´t limit yourself.

13. Look online for MIDI files of popular songs. There are loads available for free, and if you´re not the most theory-minded musician, they can open your eyes to a world of tasty chord progressions, ready to be worked into your own songs.

14. Work with vocals at least occasionally. They can teach you an awful lot about musicality, accompaniment and song structure. If you have no vocals, pick a commercial song that you like and make an entirely new backing track for it. Then write some new lyrics for it! Or send it to the label as a remix!