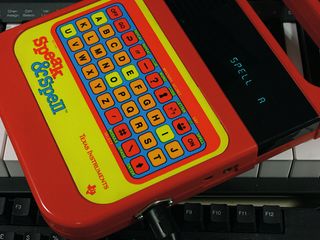 Circuit bending an electronic toy is affordable and fun.

With the financial pinch being felt on a global scale, many of us are finding that spare money that can be spent on studio improvements is no longer so readily available.

This doesn't mean that your recording space has to stay 'as is' for the foreseeable future, though. There are many things that even the most budget-conscious muso can do to spice up their studio life: here are ten that'll cost around £10 each.

1. The £10 PC
Propellerhead now offers its classic ReBirth RB-338 soft synth as a free download from and it'll run on the most basic spec computer. In fact, the system requirements are so low (90MHz Pentium for Windows or 66MHz PowerMac for MacOS 8 or 9) that you'll be able to run it on the type of computer most people throw out or give away and can regularly be picked up on eBay for £10 or less.

Once you've found yourself an old computer, install ReBirth and hook it up to the rest of your setup. Control it via MIDI and you've got yourself a really good dedicated 303/808/909 clone for almost nothing. Latency will be minimal because the computer isn't running anything except ReBirth, and it won't use up any of the processing power or memory of your main computer. You can sequence it and trigger it via a MIDI connection or just play it live with a controller keyboard.

We really like the idea of using old computers as dedicated outboard equipment. If you had access to a lot of old, unwanted computers you could even set up a kind of hardware outboard setup using them. Why not run different software on each machine to make yourself a sampler PC, a synth PC, an effects PC and so on?

2. The £10 PC overhaul
The first step is to make sure that everything's working as it should be, so carry out a standard PC spring-cleaning procedure (ask a friend or consult the internet if you're not sure how - there's no need to pay to have an easy job like this done). All the usual basics apply, so run a good virus checker, defragment your hard drives and delete any unnecessary data, including temporary files.

If you only use your computer for music, consider reformatting your hard drive and doing a fresh custom install of Windows or Mac OS. You can really speed up the operation of your audio setup by making it the only thing the computer has installed. That means ditching the games and internet software, so if you have access to two computers why not dedicate one to music and use the other for everything else?

RAM is very important to the speed of music software, so that's where we'll spend our tenner. If you're not sure what kind you need, use an online system scanner like Crucial's and then search for the cheapest supplier. £10 should be enough for 512MB or 1GB of additional RAM for a lot of slightly older desktop computers but if you can stretch the budget a bit more then go for as much as you can afford.

3. The DIY drum mic
An old studio trick is to add real punch to your recordings with a special low-frequency mic that can be made by wiring a speaker up to a preamp input. It's traditionally used for kick drums but you can also try it on any sound as long as there's enough sound pressure to drive the speaker cone.

We're on a budget here so don't worry too much about what kind of speaker you use: anything around six to eight inches should be suitable to begin with and 4ohms impedance seems to work best. You can always swap it for another if it doesn't give you the results you were hoping for.

Now you just need to figure out a way of holding it steady in front of the kick drum - clamp it to a mic stand, mount it in a bit of plywood, whatever will keep it in place. You could even put it back in the original speaker cabinet it came from, so long as you cut open the back of the enclosure to allow the speaker to move freely without damping. Now just hook it up, blend with a regular mic and EQ as appropriate to achieve super deep bass recordings.

If you want to see how to take it to the next level, check this out.

4. Bend some circuits
Circuit is the current fascination among most of the DIY audio community and it's easy to see why when you look at how cheap it is to get started and hear the excellent results that can be achieved just by poking a few wires into a circuit board and hoping for the best.

Any cheap battery-operated toy or keyboard is a good to start, and you'll need some wire, a selection of switches, a few resistors and some potentiometers. You'll easily pick the lot up for under a tenner.

Once you have all this together, the best way to go is just to start experimenting without worrying too much about how the circuit's actually meant to work.

5. Make a mic
It's easy to get carried away with mics and think that more expensive is always better, but you'd be wrong. Sure, you're not going to buy a top-quality valve ribbon mic for ten quid but you can still have some fun.

Get hold of a piezoelectric transducer (you can buy them in any electronics store) and connect its wires to the two terminals of a ¼-inch jack plug. Stick it to an acoustic guitar as a quick and dirty pickup or just attach it to anything to record the weird and wonderful sounds you can produce.

For something a bit different, take a look at modding an old workhorse like the Shure SM57. A quick Google search for 'SM57 mods' reveals hundreds of pages of tips and tricks to get better results from the old classic.

6. Use your ears
Spend a tenner on a gig ticket or new CD and approach it critically. Rather than just going along and enjoying watching your favourite musicians play, go and analyse what they're doing. How's he playing that drum part? How's she getting that sound out of that synth? What do the crowd like? What can you learn from it all?

Use a well-produced CD that you like the sound of as a reference for your own mixes. Play it back through your monitors and analyse how it sounds then try to reproduce it in your own work. Is the balance of bass, mids and highs roughly the same as in your mixes? Why does the bass punch harder on the pro mix than your track?

Rip it to your computer, run it through a spectrum analyser and figure out what's going on.

7. Acoustic treatment
Have a good listen to the acoustics of your space and you'll probably notice echoes, reverberations, standing waves and resonant frequencies which detract from the neutrality of the sound and affect the way you hear your music.

Ten quid should buy you a couple of budget acoustic treatment panels or maybe a bass trap. Although these alone might not sort everything out completely, any improvement is better than nothing.

The simplest way to check the sound of a room is the good old-fashioned clap test. When you clap your hands, you want to hear very little echo and certainly no long, bouncing reverberations or the characteristic ringing of room modes caused by standing waves (where the sound bounces backwards and forwards between walls, seeming to create a pitch). A couple of acoustic panels on the biggest walls will usually see a pretty good improvement if you're starting from scratch but move them around and keep clapping and listening until the problems are minimised.

Stud walls tend to resonate and be much more problematic than brick so you'll probably find that you won't be able to sort them completely on a £10 budget, but at least you'll be able to improve the sound to some extent.

8. Home taping
Prices for pro and high-end consumer tape machines have hit an all-time low now that they've fallen so far out of favour. You probably don't want to start using a tape machine for all your multi-tracking unless you're a real masochist or vintage fetishist, but there are other ways you can get some of the benefits of tape's distinctive sound using most budget reel-to-reel machines.

The easiest and best use for a tape machine is to saturate the tape by pushing the volume of the inputs into the red. Record audio tracks to tape to take advantage of that lovely compression, introduce mild distortion and add pleasant third-order harmonics. When it's sounding just right, record it back into your project and mix it all together.

The Sansui 1/4-inch four-track is a great example of the kind of thing you can pick up for a tenner or less.

9. Cool cabling
One of the areas where you can see massive improvement for little effort is cabling. We'd start by pulling out every plug and connector and using a good contact cleaner to get rid of all the built-up oxidisation and dirt on your connections. You can pick up a can of contact cleaner for a few quid in any good electronics store. Spray some on a cotton bud and clean out the sockets too.

Unscrew the plugs at the ends of all your cables and check for frayed wires, which can cause severe degradation of the signal path. Get the soldering iron out and fix any damage. Finally, sort out the routing of all your cables round the back of the gear. Keep signal cable runs as short as possible and away from power cables. While you're tidying the connections, sort out any hum issues, too.

10. Bargain effects
eBay's music gear pages are always packed with second-hand guitar pedal bargains, priced from a couple of quid upwards, so keep an eye out for anything that could be suitable for spicing up your mixes.

Top of our list to look out for would be fuzzboxes, compressors, flangers/phasers and wah pedals. Delays are also great, though the very good ones tend to command slightly higher prices. If you want to take it a step further, it's easy to start modifying or circuit-bending stomp boxes because the circuits are so simple.

A good start would be to re-box a wah pedal so that you can adjust the sweep by hand rather than having to use your foot. Most wahs contain a rotary potentiometer (the bit that adjusts the filter frequency) so if you put all the pedal's internals into a new box you can use a rotary knob to control the filter sweep by hand much more accurately than if you were using your size 10s.