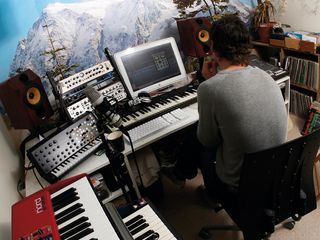 Make sure you use all of your studio time productively.

We've put together a list of the most common bad habits - if you've fallen into one, it's time to get out of it…

1. Work with the TV/radio on

It might be tempting to have MTV running in the background, keeping you company on long sessions, but turn it off now. As anyone who has walked into a pub with a silent TV playing knows, moving images are an annoying distraction.

If you need a rest from your work, then actually take one. Leave the room, get some fresh air, do something different. Return to your work refreshed, focused and free from distractions.

If your new track isn't working after a couple of attempts, then abandon it, at least temporarily. Either it was never that good in the first place or you've lost your artistic perspective. That might never return, so stop wasting your time and work on something new.

Alternatively, you could do some serious soul-searching. What exactly is it that you're trying to achieve with your music? Why haven't you achieved it? What steps can you take to ensure that this spiral of re-working never occurs again?

3. Throw in the kitchen sink

We've lost count of the number of tracks that have been spoilt by a programmer throwing in too many sounds, filling every sonic hole in the arrangement. It often happens when they've lost perspective on what the track requires.

Less is more. If your song doesn't sound good stripped back to a simple vocal and supporting harmony part (such as a pad or guitar), it's probably not a good song. Stop programming through your tracks and try and be a musician instead.

It's not very satisfying stringing beats together with no purpose other than to kill time. Eventually, you'll start to associate your musical activity with a nagging sense of underachievement. You need to be inspired and inspiring whenever you work on a new track, so only fire up your DAW when you have work to do. Kill time with games, not music - it's too important.

5. Think you can produce anything

The best piece of advice for producers we've ever heard was from William Orbit, who said that to be a great producer you should only work with artists whose work you love. You can't produce a band or song you don't like. How would you know when the record is finished, when you completely hate it? Be choosey with your time. Only work on music you love.

Sometimes it's unavoidable, especially if you're on tight deadlines. But great work is 5% inspiration, 95% perspiration. If you must work at midnight, make sure that you're doing the laborious, simple tasks that require little creative thought. If you're attempting to write a new song when all your energy is coming from coffee rather than inspiration, you've gone wrong somewhere. Go to bed.

You can waste a lot of time copying someone else's work, then trying to hide your workings so as not to get caught. If you're sampling someone else's record, then cutting it up 'to be on the safe side' you're wasting vast amounts of time. Couldn't you have achieved the same result more quickly by actually making the sample yourself?

8. Work with an idiot

Having tiresome bores around when you need to get on with your work is annoying. If you must work with a singer who you can't stand, it might be good to arrange your working schedule so that they can't sit with you throughout your mixing session. You'll need to involve them again later, but don't let them distract you constantly.

9. Buy a new synth/plug-in to rescue your creativity

Creativity, like boredom, is a state of mind. No one ever successfully recovers from writer's block or the 'bored programmer syndrome' by purchasing a new piece of kit. So, rather than buying more stuff to excite you, how about deleting a whole load of plug-ins and working with just three?

The music world is ridiculously competitive, so if you're being lazy with your work, how can you expect to be taken seriously? Work hard, work effectively and retain a sense of perspective. There are no easy rides left in the music game - every note you play and every lyric you write should hurt a little!