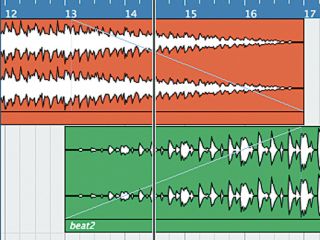 Fades can be used in many and varied ways.

It seems like such a simple thing. You've recorded your track, arranged it exactly the way you want it, applied the requisite effects and carefully mixed everything together. All you need to do now is fade it out at the end - and possibly in at the start - and you're done. Simple, right?

In practice, yes. But while creating them is a perfectly straightforward process, fades can have a huge impact on the mood and feeling of your track. There's plenty more you could be doing with the fade function beyond just clicking and dragging a straight line.

A basic fade-in may only take a couple of seconds to apply, but spend a little bit more time on it and you'll find that you can create a truly memorable opening (or closing) to your track. Here are some tips that might just make you think again about how you use fades.

Have you ever split an audio clip only to find that it clicks or sounds very harsh at the start or end? If this has happened to you, it will be because you haven't cut the clip at a zero crossing point (in other words, any point at which the waveform crosses the 0dB line). Happily, the problem is easily solved using fades. Simply apply a tiny straight-line fade at the start/end of the clip. This will remove the harshness and potential clipping problems of the jump in sound, and if the fade is small enough, it will hardly be noticeable to the ear.

Although it's a contentious point among engineers, many mastering studios prefer to do their own track fades in order to preserve audio quality at the start and end of tracks. So, if you normally send your work elsewhere to be professionally mastered, it might be a good idea to leave fade-ins and fade-outs out of your mixdown so that they can be added in at a later stage.

If in doubt, ask whoever does your mastering what they would prefer you to do, and if they'd rather do the fades themselves, make sure you tell them exactly where you want them to be - down to the exact split second.

If you've applied compression to your track, be aware that fade-outs can sometimes have an effect on it. This won't usually be noticeable unless the compression settings are extremely heavy, but if yours are then you might find yourself with some unwanted artefacts popping up as the sound fades out. If this is a problem in one of your tracks, consider automating the compression to ease up as the fade takes effect.

Got a bunch of audio clips that you want to apply fades to? Doing them all individually can take a while and be a pain, but fortunately there is a quicker way. Most DAWs have the ability to create a preset fade using a hotkey command. It's usually somewhere around 10ms in length, though of course you will have the option to adjust this. The way to set up this hotkey varies - in Pro Tools, for example, you select a piece of audio and press the F key to automatically apply a fade-in and fade-out. Setting up this shortcut in your DAW can be a serious time-saver, especially if you just need to apply small fades to multiple files to smooth things out.

A tactic currently gaining ground in some genres - particularly hip-hop and R&B - is to fade the song out at the end, then fade in a different beat for a few seconds, before fading it out again. This can add an extra dimension to the track, but it's advisable not to reduce the volume of the first track to zero before bringing in the second, as this can create unnatural-sounding dead space. Rather, fade out the first track until it's almost completely silent, then fade in the second.

It may seem obvious, but you should pay special attention to where your fades begin and end. If you're applying a fade-in, for example, it makes sense to have it reach full volume after four or eight bars, rather than peaking before or after this point. Likewise, you should start your fade-out at a logical point, like the beginning of a four-bar section. It may also make sense to leave a half-second of silence after the fade has finished before placing the end marker.

Combining fades with effects can be a great way to spice up your intros and outros. For example, try creating a really long fade-in, then putting it on a separate track, inserting a delay plug-in and experimenting with the settings (being sure to make the delay fairly long). Not only will this create a funky effect for your fade-in, but the delays will continue after the body of your track kicks in, leading to an incredibly smooth transition into the main event.

Be aware that when you create a fade, some DAWs save a copy of the part as a separate audio file in your session folder. Usually, you don't have to worry about this, as the fade files stay out of the way and don't cause problems. However, you should be careful that you don't accidentally get rid of them if you're having a technological spring clean. You're going to need those files!

Another new trick that's being used in genres such as soul and breakbeat is to take a track and rapidly fade it in and out, creating a percussive effect. You can hear this technique on Flying Lotus track Tea Leaf Dancers. It can be very effective applied to either a whole track or individual elements, as long as you make the fades quick and regular. You should be aware that it can be quite jarring for the listener, though.

To create an interesting fade-in at the start of a track, take a piece of audio, chop it up into four or five slices of equal length and then stack the slices on separate tracks. Space out the clips so that they come in one after the other at regular intervals, and give each one a convex curved fade-in.

Finally, adjust their respective volumes so that the first is the quietest and the last is at normal playback volume. What you'll be left with is a huge, swelling burst of sound that's perfect for opening a track.