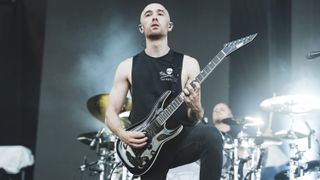 Josh Middleton, guitarist with much-respected UK metallers Sylosis, took guitar lessons, and he's given lessons. So, we got him to share some of his best tips...

Sylosis have a reputation for not drop tuning.

"We constantly get people who are surprised that we're in standard tuning, they just can't believe, or they didn't realise when they were listening to us. Inverted powerchords tend to fool people a lot of the time. But standard forces you to really concentrate on the riff that you're playing and the notes in it.

"You can't get away with playing random notes all in a low register because in standard, you can hear every note. And if one of them isn't in the right key it will really show in standard.

"So you tend to not just focus on the riff, but you also think about it rhythmically; what the drums are going to be doing, and whether the bass can play powerchords, which can really help thicken things up as well."

Great riffs and parts are about more than just your guitar - think about how your guitar interacts with the drums.

"I always think rhythmically when writing riffs; a lot of the time I won't even have a guitar with me when I'll write a riff. I'll be in the shower and humming out some kind of beat or some sort of accents the drummer can be doing that are interesting to me.

"That sort of leads into what makes the riffs sound heavy. It's not always about the riff, it's also about what came before and after the riff that makes it heavy."

Want to play well fast? You need to slow down. Yes, really...

"A lot of people chase speed, and when you go straight for that you develop bad technique. And it's going to be harder to get where you want to be.

"If you focus on the endurance side of things, it's muscle memory and you train your muscles at a slower speed; you'll get to those fast speeds you want to achieve quicker by practising slowly. That sounds wrong, but that really is how it works."

When you've read up on Josh's tips, check out the video above to see him play through some of his favourite riffs from Sylosis' new album Dormant Heart.

Overcome the stigma of theory and you'll free your playing.

"I think a lot of people are scared of learning too much theory and it dictating what they do, but after a certain point it's so helpful when you know your modes and you don't even have to think about them.

"After doing it for so long you can go on your ear and it will tell you that two frets up is the note that you want to hear. Or a fifth on the next string is the note you can hear in your head.

"That's something that I didn't really think I'd ever be able to do, I thought that was something the jazz players did and hit every note they want to play as opposed to going up and down a scale, where you know your fingers are 'allowed' to go.

"With time, you develop your ear. As a blanket approach to all beginners, learning theory will really help that, and even if you naturally don't have a good ear for music, if you practise the right scales your ear will probably adapt anyway. "

A home set-up will make you a better player and songwriter.

"It's hugely important for the writing and it's been vital in how far we've come as songwriters. It's really easy to experiment with writing ideas and what makes songs work, and what doesn't.

"The experience you get from recording yourself at home can show you what makes a song work well and how throwing in something that's a bit different can be a nice surprise as well. It's so important these days to be able to demo songs for yourself and really listen back to them with fresh ears a week or two later."

Playing acoustic guitar builds strength you can take back to your electric.

"For me, learning on an acoustic was hugely important. The first year of me having lessons was playing an acoustic, and it was kind of annoying at the time because I wanted to play heavy stuff, but it's the old story when your parents don't want to buy you an electric guitar if you're not going to stick with it.

"But it helps so much, especially for building up left-hand strength. Learning steel strung acoustic really builds your finger strength for electric, at least using a cheap acoustic in conjunction with electric as a training tool."