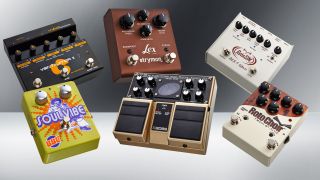 You can buy a rotary speaker, but it won't fit on your pedalboard! Instead, we give you the lowdown on the more compact option: the rotary speaker simulation stompbox...

Okay, what is a rotary speaker?

It's an electro-mechanical device originally designed by Don Leslie as an add-on for a Hammond organ to replicate the spread of sound made by a pipe organ.

Rotary speaker may be a bit of a misnomer, however, as the actual speaker components in the cabinet remain stationary while their sound is directed by rotating objects: a horn and a drum in the classic early Leslie units and just a drum in some later models, such as Fender's Vibratone.

The resulting sound, a combination of both amplitude and frequency modulation, caused in part by the Doppler effect, is a rich and complex mix of tremolo, phasing, pitch-shifting and ambience that you will have heard on various Beatles recordings from 1966 onwards, Clapton's arpeggiated riffing on Cream's Badge, Hendrix's lead on Little Wing and many more songs...

So why can't I use a real rotary speaker?

You can if you want; new models specifically for guitar are currently available from Motion Sound (SRV212), Mahaffay Amplifiers (Little Lanilei Rotary Wave), and from Hammond who produce the Leslie G27 and G37.

The downsides, though, are their size, the switching you'd have to set up between the rotary speaker and your regular amp, the possibility of the moving parts needing maintenance, and the extra mic(s) needed to capture the sound at bigger shows.

That is why several manufacturers now produce pedals recreating the sound, incidentally including Hammond, who now have an official Leslie pedal; although at the time of writing it was not available in the UK.

While some rotary speakers are passive, vintage Leslie 122 and 147 models featured a 40W valve amp that could be overdriven, and some pedals include variable distortion in their feature set to reflect that.

What are the crucial aspects of the sound that the pedals reproduce?

In the horn and drum configuration, the top end is delivered by the horn system at the top of the unit, while the low end comes via the drum system at the bottom: pedal makers often give you the option of mixing these sounds.

Speed is very important, as rotary speakers usually have slow and fast speeds that can be switched, with acceleration or deceleration adding to the complexity of the sound. Some pedals offer footswitchable speed changing and control (ramp/ rise time) of the speed of the change.

Check out some of the rotary speaker pedals we've reviewed...