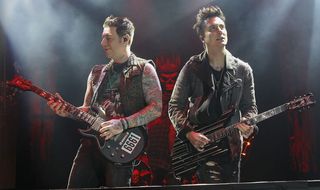 GUITARS AND AMPS EXPO 2014: Harmony guitar exploded onto the rock scene in the 1970s with bands like Wishbone Ash and Thin Lizzy leading the way. Their innovative guitar attack went on to inspire metal masters such as Iron Maiden and Metallica to add harmonies to their solos and riffs.

Harmony guitars have been enjoying a real resurgence these past years. Crank up the likes of Trivium, Mastodon and Avenged Sevenfold, and you will hear how modern players are adding their own twist to the basic harmony formula. And now it's your turn…

What is a harmony?

Most harmony parts start life as a single guitar part. The harmony is then created by adding a second part on top (and sometimes below). Most of these parts are taken from a scale of one type or another - the most common types being the major scale and the natural minor scale - and are a certain 'interval' (distance between two notes) above the first part.

The most common interval used for harmony guitar is the 3rd, which is found by counting up a scale three notes. A 3rd of A is C# (A B C#).

Bar 1 of example one below shows the A major scale harmonised in 3rds. Notice how the second guitar part starts three notes higher than the first. Bar 2 shows the same thing, but this time using the A natural minor scale.

The major and minor pentatonic scales are the same as the major and natural minor scales, but with two notes removed (five notes instead of seven). If you write a part with either of these scales, treat them as the full scale otherwise your harmonies may sound odd.

Example one: A major and natural minor scale harmonised in thirds

This shows both the A major scale (bar 1) and the A natural minor (bar 2) scales harmonised with notes a 3rd above them.

Although 3rds are the most common interval, you don't have to use them all the time. You can use any interval you like, but the intervals you'll hear most often are 3rds, 4ths and 5ths. Example two shows a lead guitar part that's ready for harmonies. Examples three to five show harmonies using different intervals.

Play example one along with the other examples so that you can hear how each interval sounds.

This is the main lead part that is going to be harmonised in examples three to five.

Thirds are without doubt the most common of all harmonies, with bands like Thin Lizzy and Iron Maiden using them extensively.

Play both parts so that you get used to the different fingerings.

5ths have an epic sound. This harmony is often used at the same time as the 3rd (the player will overdub it in the studio).

There are times when using the same interval throughout a solo will make some notes sound wrong. This is more noticeable when notes are held for more than a beat or two. The reason for these 'bum' notes is that one of the notes clashes with the accompanying chords.

Bars one to two show you how using one set interval for a whole solo can cause problems, while bar two shows how adjusting a single note can mean you avoid any problems.

Selecting the right notes for your harmonies is all very well, but it's important to pay attention to how the parts are played. The little nuances of your playing need to be reproduced in the harmony part. Consider things like how long a bend lasts and what beat a slide into the first note starts on - all of these techniques need to be the same in both parts.

This can be tricky for two guitarists to nail, but it's worth the effort - no-one wants to hear a sloppy harmony. Example seven shows a part that requires a fair bit of attention to detail to play exactly.

Your goal here is to duplicate the nuances of the first guitar part as you play along with the backing track.

Time to get experimental

Finally, we've given you a broad outline of how to work out and perform harmony solos, but you should always experiment to get your own ideas. Avenged Sevenfold create original harmony parts in their songs, and example eight shows how they might put together a phrase - Synyster and Zacky are fans of swapping the high and low parts around as well using unusual intervals and scales.

This uses the D harmonic minor scale and a B natural in bar two. Guitar one starts as the high part, but drops down an octave halfway through.