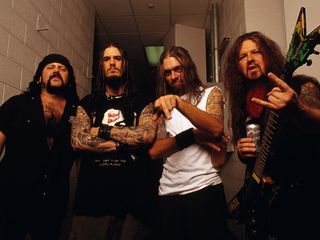 This previously unreleased Pantera track has emerged recently as part of the Vulgar Display Of Power 20th anniversary package.

The song is played in drop D tuning (DADGBE), but with the guitars detuned by approximately a further quarter-tone interval. This unconventional tuning is a typical feature of Pantera recordings.

The riff-fest kicks off with this belter of a groove. The intro is essentially the riff played twice, but take note of the way Dimebag contrasts a heavily palm-muted delivery on the first time through with an unmuted version on the repeat.

The hardest part of the riff is maintaining downstrokes during the fast powerchord changes. Granted, it's easier to add upstrokes, but it loses the attack and groove, so aim to stay strictly with downstrokes for each powerchord to deliver the intensity and drive that the riff requires. (JH)

Use a guitar with a humbucker in the bridge position to help you recreate Dimebag's vicious, heavy sound.

He famously used transistor amps during this part of his career. Set the gain fairly high on your amp and lower the midrange to simulate an authentic tone.

A large part of Dimebag's distinctive sound comes from his pick-hand attack, and to get in the ballpark, aim to hit the strings fairly hard, no more than an inch or two away from the bridge to give a bright, cutting tone.