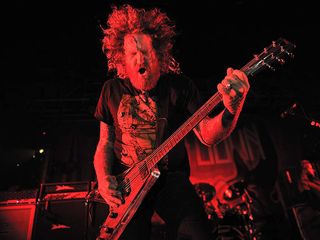 Spectrelight is a track from Mastodon's latest album, The Hunter. In this video guitar lesson we look at how to play the song's main riff.

The whole of Spectrelight is played in a hybrid drop A tuning (AGCFAD). Strings one to five are a tone lower than standard tuning, but the sixth string is lowered by seven semitones to an A note.

Playing the repeating pedal tones on the open sixth string at the same time as the single-note melodies on the fifth string is the hardest aspect. Concentrate on moving your fingers between the fifth and sixth strings during these sequences.

Make sure you use 'down, up, down, up'- style alternate picking throughout these single-note phrases to ensure you pick every note in the right direction. Listen to the triplet feel of the 12/8 time signature; you have to play three pick strokes for every beat. Use firm downstrokes for the octaves and powerchords at the end of the riff.

A guitar fitted with a humbucker is best for playing Spectrelight. Select the bridge pickup to get a bright tone, because downtuned guitars can easily sound muddy and unclear. Use a decent amount of gain, while setting the amp's EQ to a scooped metal sound. However, achieve this by setting the mid control to the middle and adding extra treble and bass. By leaving the mid control, it will help to retain clarity and a fuller tone in lower tunings.

For more guitar lessons where that came from and a whole lot more besides, check out Total Guitar magazine on Apple Newsstand. US readers click here.