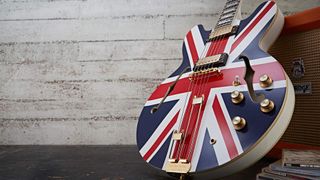 2015 marks two decades since Blur and Oasis released their landmark albums, The Great Escape and (What's The Story) Morning Glory?. To celebrate, here's a look at the playing that defined the biggest movement in UK guitar music since Beatlemania…

Britpop tracks such as Suede's So Young and Sleeper's Delicious used arpeggio-based riffs with a melodic slant. We've added bends to our arps.

From Reef and Shed Seven to Blur and The Lightning Seeds, the influence of Jimi Hendrix is far-reaching throughout Britpop's short history. Try using hammered-on shapes, partial chords, inversions, melodic breaks and diads to add a bit of flair to simple chord progressions.

What?! Hear us out. Britpop is a direct descendent of the Madchester baggy scene. Droning open strings and funky wah rhythms give you the vibe.

Just burn up the neck, baby

Bands such as Ash and Radiohead took a left-field approach to soloing, with dissonance and rapid tremolo picking featuring in tracks such as Burn Baby Burn and Just. Another throwback to Jimi Hendrix, maybe? Draw out the unison bends in bars 1 to 3 to really milk their clashing sound.

Try your hand at one of Noel Gallagher's favourite repeating pentatonic lead tricks, which you can hear in tracks such as Don't Look Back In Anger. Listen, also, to Manic Street Preachers for simple but effective lead licks in Enola/Alone and If You Tolerate This...