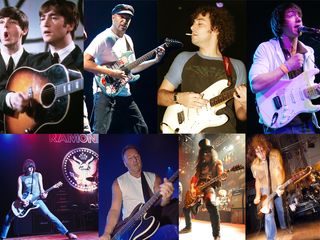 There was a time when wearing your guitar up high on a short strap was about as cool as Death Valley marathon runner.

A low-slung guitar was an almost political statement, aligning you with punks like Johnny Ramone and Sid Vicious and sticking two defiant fingers up to the cape-wearing prog virtuosi and stuffy folk artists of the age.

Similarly, the pouting hair metal prima donnas and the guitar anti-heroes of grunge and alternative rock all tended to prefer their guitars slung low - with Rage Against The Machine's Tom Morello an agit-rock exception that proved the rule.

The end of the 20th Century ushered in a wave of new artists who shredded the rulebook. When The Strokes arrived on the scene, we scratched our heads.

There was Nick Valensi, stage right, sporting an Epiphone Riviera beneath the belt with the cold allure of a catwalk model. And yet over on stage left, Albert Hammond Jr was not only bashing away at a white Stratocaster that almost grazed his chin, but he was making it look brilliant into the bargain. Trousers got tighter, guitars got higher, lines were blurred.

With British guitar bands like The Libertines and Arctic Monkeys following suit and a new generation of metal players doing whatever the hell they liked, many teenagers forming rock bands in the noughties chose to keep strap lengths defiantly short, harking back to the mop-topped British pop heyday of the 1960s.

But back when London swung and there were 240 pennies in the pound, it wasn't all guitars-as-bow-ties. Keith Richards - a fully paid-up low-slung guy - would often poke fun at John Lennon because of the height at which the Beatle chose to play. And by the end of the decade, Jimmy Page had set the image of the male rock guitar hero in stone with a Les Paul dangling somewhere around his ankles and a cigarette hanging from his bottom lip.

Accepted wisdom and sensible guitar journalists suggest that, from both a medical and technical perspective, you have found the 'ideal' strap length if your instrument sits in the same position whether you are standing or seated. So how the hell do players like Slash manage to blaze away at the dusty end of the fingerboard when they wear their guitars so low?

Watch any video of the former GN'R man playing live and you'll notice that he usually changes position when intricate soloing is called for by pulling the guitar almost vertical, often resting the butt of the body on his knee. That's having your cake and eating it, right there.

The bottom (or top) line

These days, whether you decide to go high or low seems less of a badge of identity. As ever in rock 'n' roll, it's being committed that counts. If your six-string is hovering sensibly somewhere around your middle and nestling against your belly, you might just find that you've made the most conservative style choice of all.

Although we can't deny that our own instrument has crept up towards the middle in recent years, we encourage you to throw caution to the wind and be bold. Your heroes almost certainly did, and when it comes to gaining entry to the pantheon of rock greatness, sounding good is only part of the equation...