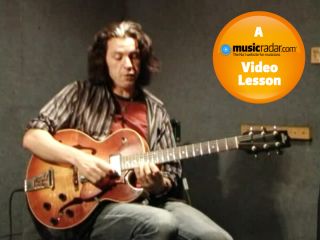 In this tutorial, Alex has a three-note sweep-picking idea that should help you find your way into parts of the neck you might not have covered before.

Don't worry if you haven't done sweep-picking before: all you have to do is play two notes on adjacent strings using a single pick stroke to pick both strings. And, because you don't have to pick each note individually, you can play the lick a lot faster once you're confident with the technique.

The first three notes in bar 1 of the piece below form Alex's basic three-note phrase, which he adapts by moving it up and down the neck. You can use simple patterns like this to bridge the gap between pentatonic positions, or you could use them on their own to create new melodies.

Example: sweep picking in a solo