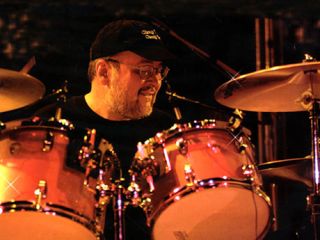 For 35 years, Bun E Carlos has been more than the big beat behind the euphoric pop-rock sound of Cheap Trick, he's also been the band's chief setlister and archivist.

No, it certainly isn't. Cheap Trick have recently released their latest album called - OK, get this - The Latest, and they're curently on a tour with Def Leppard and Poison, "Not a horrible way to spend the summer, I can assure you," says Carlos. "I have a lot ot friends who still wish to hell they could be me."

Ahhh, yes. But how does one get to be Bun E Carlos? The redobtable musician recently shared with MusicRadar his hallowed list of drummers dos and don'ts, rules every stickman must adhere to. While they may not have you headlining Budokan before screaming throngs, they will certainly up your game.

"Put it this way," says Carlos. "The Dream Police will not arrest you if you follow these steps."

Next page: Bun E Carlos's dos and don'ts for drummers

1. DO have a music lawyer look over your contracts

"Before signing any contract, you have to assume that the guy on the other side of the desk is handing you a shifty piece of paper that works to his advantage," says Carlos. "I know that sounds cynical, but it's really that simple.

"I don't care if it's the record company, the manager, the booking agent, the publisher - anybody you deal with, they're handing you something that's designed to make them the most money. And they have lawyers on their end who have drafted these contracts. So what are you to do? Trust them? C'mon, that's kind of naïve.

"Ask your musician friends, particularly if you know somebody who's making money from his music: 'Who can I hire to look over this contract?' If they've done their homework, they can help save you a lot of headaches, and heartbreak - and money!

"Every musician in the known universe has signed a bad piece of paper, myself included. But it's really very simple. You're the artist. It's your picture that's going on the CD cover, nobody else's. Protect yourself. Get a good lawyer. You'll kick yourself later if you don't."

2. DO hydrate yourself while playing

"The last thing you want to do is play a long gig on a hot night, pass out and wind up in a hospital emergency room," says Carlos. "When I say 'hydrate,' I really mean 'electrolytes' - you have to keep replenishing them as you play. Think about it: If you were working out on a hot summer day, sweating like crazy, you'd be drinking a lot of water to stay hydrated. Drumming under hot lights for two hours - same thing.

"A couple of years ago, I found out the hard way. I played a long gig and we were on a bus, my heart started beating out of control, my eyes rolled back in my head and before you knew it, I was in the hospital.

"The doctors told me my potassium levels were way, way down, which happens when you're dehydrated. 'Eat a banana after a show,' they told me, 'or drink some Gatorade.' You gotta do it. This goes beyond your ability to keep time as a drummer; this goes to your health and well-being.

"Nowadays, I always have Gatorade with me during a show. I used to drink Mountain Dew, but that's just sugar; it doesn't replace the electrolytes your body needs."

3. DO warm up before a show

"It absolutely helps," says Carlos. "You just can't walk into a venue, sit behind your drums and expect to play a great show. It'll never happen.

"For me, I just grab a pair of sticks and bang them on things or twirl them around. I practice on a pad or whatever's handy - drums with towels on them, anything I can. Ten minutes is generally all I need.

"Sometimes I just sit down, cross my legs and tap on my shoes. Othertimes, I bang on countertops or sofas - whatever works, you know?

"I remember hearing years ago that the drummers in Boston and REO Speedgwagon would travel with full kits that they would practice on backstage before gigs. I'm not saying that's excessive - if that does it for you, hey, that's cool. But I never felt the need to go that far.

"You have to get the limbs going, get your head in the right space. Everybody has their own level of practicing, My rule of thumb is quite simple: you know you're warmed up when you're warmed up."

"On your days off, practice the songs you're going to play in your set and pay attention to the tempos," says Carlos. "You develop muscle memory and you learn when the other guys might speed up or slow down.

"Remember: You're the time-keeper; you're the metronome of the band. Without you, the other guys are all over the place. So it's your job to stay steady as a rock, and the only way to do it is to practice your tempos over and over and know them in your sleep.

"There's nothing like repetition. Muscle memory. If you do something over and over, your body will automatically remember what to do. You can't just go on stage and think you're doing to rock out and everything is going to be cool. Doesn't work that way; you're going to be a mess."

5. DO listen to somebody else play your drums

"I discovered this during sound checks when my drum tech would play my kit and I'd walk out into the auditorium and go, 'My God, is that the way my drums sound?!' I was horrified.

"What I discovered was, the way I liked to tune for recording, with the rack toms and the floor tom tuned way down low, had no bearing on my live sound at all. You could hear my bass drum, the snare, the hi-hat and cymbals...and nothing else.

"Live, you have to tighten up the tuning on your rack toms and floor toms. But even if you're not playing arenas or theaters or whatever, have somebody play your drums and stand a good ten feet or more away from themand listen. You'll be in for quite a surprise."

6. DO try to get paid first

"Back in the day, I worked in bars and there'd always be the guy who'd say, 'Yeah, you guys are really packin' 'em in tonight. We'll pay you after the show,'" says Carlos. "And after the gig, you'd look around for the guy, and he was long gone.

"Obviously, when you're at a very professional level, things are different. But if you're gigging at bars, clubs, small places, always try to get cash in hand before you go on. What are people going to say? 'No, you play first, then we pay you!'? Screw that. Hey, without you, there's no show! Get paid, man."

7. DO record your gigs

"Back in the day, and I mean way, way back in the day," says Carlos, "we were playing a bar in North Dakota. I hate to admit it, but we were actually playing Smoke On The Water. There's a breakdown to the song at the end, or at least the way we did it there was, and the band starts jamming, and I would think, This is awesome. We're on fire, man!

"But you know, tape doesn't lie. And when I finally got a chance to listen to a tape of a performance, I was stunned at how horrible we were - and how bad I was playing! So I tell everybody, tape your performances. It's humbling, it's embarrassing, but it'll help in the long run."

8. DON'T get high before the show

"Or drunk or whatever - this should be obvious," says Carlos. "So many shows back in the day seemed great when we were playing them, but then I listened back to the tapes and we sucked. Why? Because one of us or a few of us were high before we played.

"I call marijuana a 'band enhancer.' You smoke a joint and suddenly a record or a band is the greatest thing ever. But if you listened to that same band or record totally straight you'd be like, 'Yeah, whatever.'

"I'm not trying to be Mr Preachy here, but you're only going to be awesome on stage if you play to the best of your abilities - and that means everybody has to keep a clear head."

"If the guitar player or bass player or singer makes a big clinker on stage, don't show it," says Carlos. "Chances are, the audience didn't catch it. You'd be surprised at how the sound washes around in these huge halls and arenas.

"But if you look at your bandmate, like, 'What the hell was that?" well, he's going to give you a funny look, and before you know it, everybody's going to realize that something wrong went down - and then the crowd will too.

"If somebody makes a mistake, just keep playing. Because you know what? When you make a mistake - and you will, believe me you will - you're going to hope your bandmakes do the same thing. All for one, one for all. If somebody fucks up, keep right on playing."

10. DON'T take too much advice from your band members

"Nothing against your singer, guitar player, bass player, whoever, but what the hell do they know about playing the drums?" Carlos asks. "Answer? Nothing!

"So forget what they have to say. Do they want to hear your thoughts on what they do? No! Of course not, They couldn't give a shit. Same goes for what you do. You're the drummer, not them. Tell them to do their jobs and you'll do yours. End of story."

11. And finally...DON'T let your women get involved in the band!

"I have two words for you," says Carlos, letting out a laugh. "The Beatles."

He expands on this last rule: "Listen, my wife worked for a phone company, Illinois Bell, for 16 years, and I never once went down there and said, 'Hey, you know what? You should do your job differently' or "I think you should be doing this instead of that.' She'd be like, 'Get out of here!'

"Same goes for bands. I'm not trying to be sexist or anything, but what wives or girlfriends have to say doesn't matter. My wife would never tell me that a part I was playing was dumb or didn't work - it's not her place. So don't let your women have that kind of power over you.

"Again, look at The Beatles. Greatest band in the world. But what happened when the women got involved? Need I say more?"