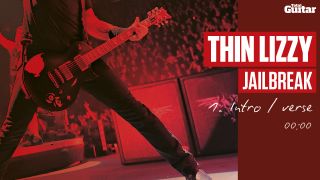 Monster riffs, alien overlords and the start of something big: Scott Gorham and Brian Robertson dig into the title track of the album that proved Lizzy's saving grace.

Pick up Total Guitar issue 217 (on sale 8 July to 4 August) for an exclusive interview with Thin Lizzy's guitarists past and present including Scott Gorham, Brian Robertson, Midge Ure, Eric Bell, Vivianne Campbell and Richard Fortus. Read about the making of the song and get the backing track, a guide to nailing the guitar tones and the scales and chord diagrams from the tune.

Read it!
Every song has a story. Where possible we speak to the musicians and studio technicians to explore the inspiration, as well as the writing and recording processes behind your favourite songs.