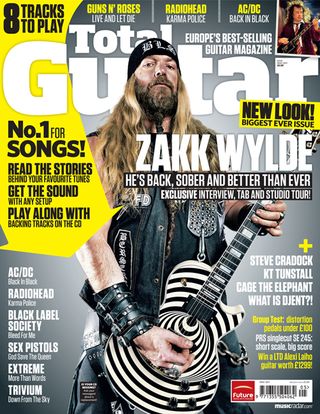 The latest issue of the new-look Total Guitar magazine is on sale now. Featuring Zakk Wylde, Steve Craddock, KT Tunstall, Periphery and the chance to learn AC/DC's classic Back In Black in an overhauled Learn To Play section.

Zakk Wylde
The Wylde man is back, sober and better than ever. We meet the shred berzerker on his British invasion with Black Label Society. Zakk tells all about jamming with Captain Kirk, gives a guided tour of his Black Vatican studio and reveals a Black Label Guitar Bible for fans of his playing.

Djent
The story of djent, the new wave of progressive metal, told to you by its pioneers and leaders: Meshuggah, Periphery, Tesseract and Monuments. The experts explain all.

Steve Craddock
The 21st Century Mod, Paul Weller's trusted collaborator and Ocean Colour Scene man invites us into his Devon studio for an exclusive peak into his world of playing and vintage gear.

KT Tunstall
We take your questions on songwriting, looping pedals and rhythm playing tips to the Scottish acoustic star.

Learn To Play
Read the stories behind the songs, get the sound with any setup and play along with backing tracks on the CD.

Video Lessons
All of TG's Video Lessons are now hosted online through www.totalguitar.co.uk/video, but you'll have to buy the mag to get the most out of them. Here are all of the videos from TG214.

TG214: Sneak preview
Have a look inside the new issue right here!

Competition: Win a LTD Alexi 600 Blacky guitar worth £1,299!
Bag yourself a serious slab of signature metal guitar, as played by Children Of Bodom guitarist Alexi Laiho.