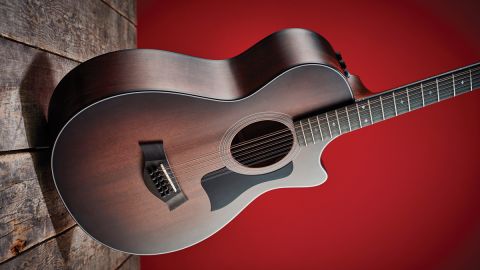 Taylor has gone from launch to the largest acoustic guitar manufacturer in 43 years by getting things right, and then sticking with them. This is not to say they don’t innovate; Taylor is always improving details on its guitars, but there’s nothing wild and wacky. When you pick up a Taylor, you’re going to get a well made, very playable, sweet sounding guitar which you can rely on, and which will look classy and understated. The 362ce, and its sister the 352 are no exception.

Having said you know what you’ll get, the 362ce, while instantly recognisable as a Taylor, has its own visual signature. It’s a Grand Auditorium, Taylor’s signature shape, designed by Bob Taylor as the ultimate all-rounder and still the mainstay of the range.

The top is mahogany, and in keeping with the current trend towards giving guitars a Depression-era style, it’s satin finished in a dark, faded-looking sunburst that Taylor is calling ‘edgeburst’. Back and sides are Tasmanian blackwood, bound in black plastic for an overall very dark look. This is an appropriate point to discuss the fact that, for a Taylor, this is basically a budget model.

Despite being priced at around £1800 on the street, the 300 series is Taylor’s lowest priced all solid range, and while they’re not quite poverty spec (there are three series below it), you certainly don’t get exotic wood binding and fancy inlay work for your money.

The combination of Taylor’s brand strength, reputation for quality, and more than anything the cost of American labour against that of Asia means that the Taylor needs to stack up in other areas to look like a good choice.

The rosette is simple black and white, there’s a plain black scratchplate, and a simple bowtie bridge in what looks like rosewood, but in these CITES days might be a different material. It has a micarta (synthetic bone) saddle, and at the other end of the strings you’ll find a Tusq nut.

The neck has a shorter than average scale length of 24 and 7/8 inches, which will contribute to lower string tension, and 18 frets on the ebony board. Fretboard inlays have a diamond/snowflake appearance, there are white edge position markers, and a trademark Taylor coffin-like headstock with 12 Taylor branded closed back tuners.

The matt black volume, treble and bass controls on the shoulder are barely visible, and don’t detract from the guitar’s appearance at all. Overall, the look is very understated, and Taylor has nailed the Depression-era style without making the guitar look cheap. You can imagine this guitar being played in the corner of a dusty boxcar, but equally, it won’t look out of place in the premium acoustic section of a guitar shop.

The unflashy nature of the 3 series lends itself to this aesthetic, and we were very taken with the 362.

Quality-wise, Taylor doesn’t do things any other way but right, and the 362ce is no exception. Everything aspect of the guitar is executed to perfection; fret ends are perfectly smooth, the minimal decoration is crisp and clean, and a peek inside the soundhole reveals bracing that could be outerwear rather than underwear. The tuners are positive, smooth and stable, and Taylor’s Expression System 2 pickup, with the piezos behind, rather than under the saddle, is reliably excellent.

Twelve-strings are often dreadnoughts, and that, combined with higher string tension from twice as many strings, and for those of us who first tried a cheap 12, often very high action can render them hard work to play.

The mid-sized body makes it easy to wrap your arms around the 362; it’s not a parlour, but it’s easy to embrace it while sat in your armchair. On the strap, it suffers a little from neck dive, as most 12-strings will, but it’s admirably light weight makes it comfortable to wear. As befits a Taylor, the action is low and slick, the string tension is totally manageable even if you’re new to 12-strings, and the intonation is perfect across the board, not so easy to achieve when you are running pairs of strings an octave apart.

Sound-wise, Taylor describes mahogany as having a woody, dry tone as a topwood, but that’s not how we experienced it. Maybe it’s just all those extra treble strings chiming, but the 362 actually sounds really open, ringing and bright. Listen in a more forensic way, picking the individual bass strings while avoiding their octave-up pairs for example, and you can hear that trademark chocolatey darkness to the mids and lows.

No doubt if we were able to play it alongside its spruce-topped sister, the 352, we would hear a brighter tone, but the balance here is wonderful. Flatpicked or strummed, the 362 really sang, and made me explore music that perhaps we wouldn’t have tried on a 12-string; lead parts and single note runs. Fingerstyle was also rewarding, with the light action allowing complex work to ring out nicely.

The 362 is tremendously rewarding to play acoustically, and the extra volume of a 12-string might make you feel you don’t need to reach for a cable, but if you do, you’re covered. The Expression System claims to avoid a lot of the piezo ‘quack’ and excessive paunchiness of upper mid and trebles which beset many pickup systems, but placing the pickups just behind the saddle, rather than under it.

Plugging in, we find that this has been successful; you’re getting pretty much the acoustic tone, but louder, which really ought to be more common in 2017. The controls are simple to use without looking at them; each knob has a centre détente and a marker you can feel with your finger, so getting to the tone you want is as easy as can be. It would be nice to have a tuner, but then a more complicated head unit, particularly one with any lighting, would interfere with the aesthetic, so maybe it’s churlish to complain.

We were right from the outset; you know what you’re going to get with a Taylor: an excellent guitar, built and set up to the highest standards, with a tone to match. It’s that reliability that keeps Taylor afloat and selling strongly as the tide of excellent imports rises.

Simple, understated good looks, a flexible, winning tone, and quality that you can trust are taken as read. That they’ve tamed most of the challenges associated with a 12-string is just the icing on the cake. If you want a 12-string that doesn’t require the grip of the hulk or the reach of Stretch Armstrong, you should try this guitar. It will not disappoint.