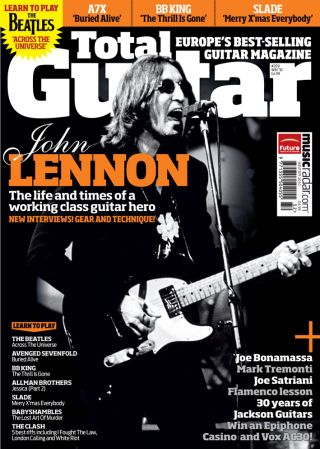 Issue 209 of Total Guitar magazine is available on newsstands nationwide from today. Featuring John Lennon on the cover, TG is celebrating his contribution to guitar music and his oft-overlooked talent as a guitarist. Here's a quick look at what's in the mag and on the site this month...

Jackson Guitars 30th Anniversary
Metal in the blood: As Jackson celebrates 'the big 3-0', TG traces the evolution of its high-performance metal guitars.

Mark Tremonti
Guitar god in training: He's the envy of many a player, but Tremonti maintains he still has a lot to learn. TG finds out why.

Joe Satriani
Innovations in sound: TG probes the mind of Joe Satriani to discover the impact of his truly pioneering techniques.

Learn to play!
The Beatles 'Across The Universe', BB King 'The Thrill Is Gone', Slade 'Merry X'Mas Everybody', Avenged Sevenfold 'Buried Alive', The Allman Brothers Band 'Jessica' (part two), Babyshambles 'The Lost Art Of Murder' and five of the best Clash riffs!

John Lennon: A fortnight of features
Over the next fortnight TG will be publishing a selection of interviews, videos and quotes from some of the myriad guitarists who have been influenced by Lennon in some way.