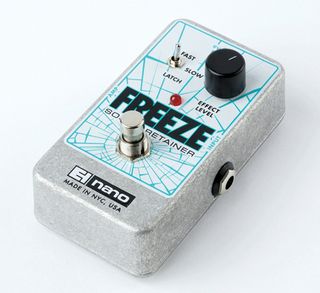 In Total Guitar issue 207, we take a look at Electro-Harmonix's new Freeze Sound Retainer pedal. It works by capturing a snapshot of the signal that's running through the pedal when you stomp on the switch. The result is a sustained sample which plays until you reset the pedal.

For our demo, we created four different sounds using the Freeze pedal, our Fender Classic Player Stratocaster and some additional effects from IK Multimedia's Amplitube 3 plug-in. All the sounds you'll hear are made using a guitar - no other instruments (except the drum tracks) were used.

The first sound is a droning synth-style pad. It was created by freezing two notes, then repeating them an octave higher. Next we applied some subtle filtering and chorus to add a wavering to the sound.

Next is a rhythm part playing chords that were filtered using Amplitube's LFO Filter, then run through a tremolo effect to produce the choppy synth style pattern.

After this, we added a string part using the Freeze, a mild overdrive and a volume pedal. By placing the volume pedal after the Freeze in the effects chain, you can fade in the volume of the frozen sound, chopping off the attack to produce a bowed effect, while the Freeze creates the constant sustain.

Finally, we played a more traditional guitar picked guitar part while tapping the Freeze on and off. By switching the Freeze pedal in and out on different beats of the bar, it sustains some of the picked notes, while leaving others dry. This results in a spooky frozen sound with partial sustain and reverb tails.

For the full review, check out Total Guitar issue 207, on sale 1 October.