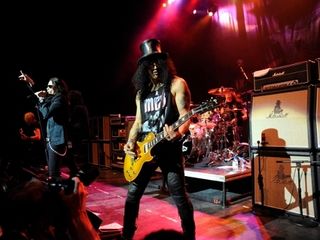 Slash has become the latest artist to upset the creator of musical series 'Glee', Ryan Murphy, after the guitarist refused to allow the show to use a Guns N' Roses song.

In a recent interview with 'Entertainment Weekly' the guitarist revealed that 'Glee' had approached him, stating: "We got asked about that once already but it got turned down."

However, it seems to have been the following comments that upset Murphy, as Slash told his interviewer: "In the current climate of what's going on in entertainment these days, I try to be more optimistic than negative because it's really easy to get negative about it, but I draw the line at 'Glee'.

"Glee is worse than 'Grease' and 'Grease' is bad enough… I look at 'Grease' now and think: Between 'High School Musical' and 'Glee', 'Grease' was a brilliant work of art."

Murphy has since responded, telling 'Hollywood Reporter': "Usually I find that people who make those comments, their careers are over; they're uneducated and quite stupid."

We're not going to pick sides here… But we know who we'd rather hear playing the solo from 'Sweet Child O' Mine'.