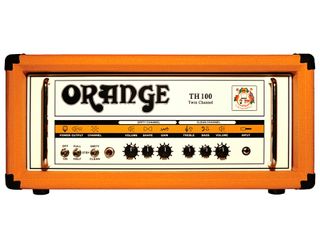 Orange Amps has announced a new high-powered head version of its popular TH30 combo/head, the TH100.

TG gave the original TH30C combo a five-star review and a Best Buy award, so it will be interesting to see if the new amp can live up to its smaller (but older) sibling's formidable reputation.

'If it ain't broke, don't fix it' appears to be the ethos here, though, and Orange has opted use the same controls and preamps that featured in the TH30. Another feature it will share with the smaller model will be the ability to switch to half power, meaning that you can reduce the volume of the unit, without compromising the valves' sound.

Other Orange gear on show at NAMM 2011 includes the Terror Bass Combo and the OPC all-in-one computer amplifier speaker.

Keep checking the TG site for more NAMM 2011 guitar news and for more details of Orange products head to the Orange Amps website.