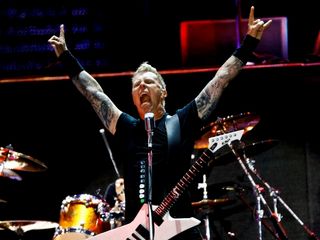 Thrash titans Metallica joined forces with Dave Mustaine to play five songs from 'Kill 'Em All' at The Fillmore, San Francisco on 10 December, in celebration of the group's 30th anniversary. Oh yeah, and Geezer Butler, Ozzy Osbourne and every surviving 'Tallica member also dropped by.

Saturday (10 December) saw the group close the final night of a four-show run at The Fillmore, San Francisco with a star-studded line-up of guests that included Dave Mustaine (who appeared for five songs, including co-credits 'Phantom Lord', 'Jump In The Fire' and 'Metal Militia'), Jason Newsted, Ron McGovney and friends of the band Hugh Tanner, Lloyd Grant and Mike Osegueda.

If that wasn't enough for the crowd of the 1,150 capacity Fillmore, Geezer Butler and Ozzy Osbourne also swung by for a run of 'Sabbath covers, including 'Paranoid', 'Iron Man' and 'Sabbra Cadabra'. Check out the full setlist below (originally found on www.NME.com).

The group also recently sent out a free EP, 'Beyond Magnetic', of tracks rejected from the 'Death Magnetic' sessions to their fan club - and it's much better than that description makes it sound.

Following the Lou Reed debacle (we can't even say it anymore), Metallica are clearly making a concerted effort to 'metal up the place'. And, if that's the case, we're onboard.*

* We're not against bands experimenting outside of their usual genres - just Metallica.