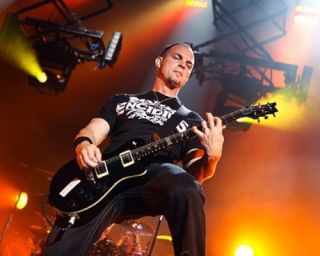 TG looks back at the 2005 cover interview with Alter Bridge guitarist Mark Tremonti, where he talks about writing an exclusive instrumental track for TG readers, shredding with Michael Angelo Batio and why solos rule!

Five years ago, after hanging out with Mark Tremonti at Download Festival, TG asked for something we never thought would happen. We're not sure whether it was star-struck adrenaline, too much booze, barefaced cheek or a combination of all three, but we asked the shred-tastic axeman to record an exclusive instrumental track 'for TG readers only.'

Not only did we get a resounding "hell, yeah!" from Tremonti, but he very sportingly got three other members of the band Alter Bridge - drummer Scott Phillips, bassist Brian Marshall and vocalist/guitarist Myles Kennedy - involved as well. The instrumental, 'Ahavo Rabo Taco Salad', was then given away with issue TG143 and the feedback we got from you guys about that sizzlin' instrumental was incredible.

Firstly, where on earth did you get the name 'Ahavo Rabo Taco Salad' from?

"Man, we've had some trouble coming up with a cool name for this thing, let me tell you! The original idea we messed around with was Phrygian Taco Salad, because the whole piece has that phrygian feel running through it. The Taco bit came from the cool Spanish breakdown in the middle where I pull out the nylons - but it didn't have that ring to it. Then Myles was surﬁng around the web and discovered that the name for the A harmonic minor scale I use in the solo is actually the Ahavo Rabo scale. So, there ya go!"

"We got in the rehearsal pad and just went through some riffs - I decided to make it more of a metal track so I could whip out the cool technical playing. I love that neo-classical harmonic minor sound. We did a metal riff to start the song off with, and picked three or four parts to splice together to make a little over a three-minute rhythm track. Then I got to work on the solos. It was like writing four solos in one song: two solo breaks, then a double solo break at the end."

Did you want to really exploit your shredding capabilities that perhaps don't get used as much in Alter Bridge?

"Totally, because when I'm backstage and practising, I'm practising the real shred stuff, the real neo-classical stuff, whereas in Alter Bridge I play mostly pentatonic solos with little bits of ﬂashy improv here and there. This was a chance for me to rip out the real fun diatonic solo stuff. This is strictly shred! I thought, for TG, the more technical the better - give the readers something to get their chops around!"

Originally you were going to record it yourself. Why did you decide to get the rest of the band involved?

"I wanted to have drums and the whole big band feel. I didn't want to just sit down and have one guitar going - that would be an instrumental that would take about two years to write! So we rigged up the Pro Tools at my house and spent one day doing the arrangement, then spent one day recording the main rhythm tracks. Over the last three or four weeks, every time I got a couple of hours away from the wife, I've been up there working out the solos!"

When you're recording solo spots, do you like to improvise or do you spend a lot of time writing speciﬁc parts?

"When we're writing the record I always improvise, but when we come to the studio to record I like to listen back over the tapes and see what ideas I had and then piece my favourite improvs together. Sometimes I have to write from the word go, sometimes it just comes right out. I love A harmonic minor - the solos for the TG instrumental are all in that because I ﬁgured this was one I couldn't improvise on. This was one that I had to really sit down with speciﬁc parts and just throw everything I had at it."

Have you ever written an instrumental track before?

"I've always wanted to do an instrumental, but no, it's something I've never done before. In fact, I have this master plan where I want to write a track and then ask the world's best guitar players to all play on it, one after the other, to see everybody's different approach to it. I had something going there before Creed broke up. There were a bunch of guitar players who were interested in doing it with me."

Can you name a few?

"I talked to Steve Vai, and I'd have liked to involve Carlos Santana because he's a PRS guy. There was also Eric Johnson… but this was years ago. Right now I'm greatfriends with Michael Angelo, John Petrucci and Rusty Cooley. It would be cool to get those guys on it. Michael, Rusty and I get together and jam. It's really weird playing with guys like that. You can't gain much from them because there are so many notes! Maybe you could put a call out in the magazine for me: 'Calling all shredders!'"