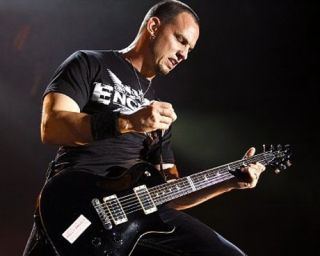 It seems people are only just cottoning on to the fact that Mark Tremonti is actually a frikkin' guitar god! How have you gone about developing your technique as a player?

"[Laughs] I like to spend months at a time with a different guitar player. Right now I'm in Jason Becker mode. I really try and play their stuff the way they play it, but every time you do that you feel you're not up to par because you start mastering one person, then jump into somebody else and it's a completely different story. I just try to achieve a good level in all different aspects of playing: the blues, shred stuff and mostly just writing interesting song arrangements. That, for me, is the most difficult thing. It's easy to go out and shred, but it's hard to get technical shred type stuff into a song that actually makes sense. You know, for the good of a song."

You're also a big fan of Stevie Ray Vaughan and blues guitar, aren't you?

"When you guys interviewed me at Download earlier this year, I was really into my blues playing. I was trying to get that Stevie Ray Vaughan feel. Now I'm right off blues again. It was going good, but it's just that I love playing the fast shred stuff! I grew up a metal head, man. I'll stick on the blues for a couple of months but I always get back to the shred, so my blues playing will suffer. I mean, Stevie is my all-time favourite player in the world and he loved the blues more than anything else. That was his thing. But I try not to put all my eggs in one basket."

A break from playing helps you improve...

Do you feel you've improved as a guitarist since forming Alter Bridge?

"I think I'm always getting better. I went the last couple of years without taking any breaks, you know? I played constantly and developed tendonitis in my wrist so I had to take a break. I went one whole month without even touching a guitar and I was terriﬁed to pick it up again. My ﬁngers were real soft. I felt like I was just starting out, but two days later I was playing better than I've ever played 'cos everything was fresh. I honestly feel like that break made me a better player. Now I'll play eight hours a day out on tour, get home, spend a few days with my wife and child and then come back out and play better for having taken those days off. It works for me and I'd say to your readers if you're starting to hit a rut, it's something to try. It's the same thing with techniques. If you take time out, step away then come back to it and you will have a different perspective."

Were you intimidated by writing an exclusive track for a guitar mag?

"Well it's funny. I used to be intimidated by everything, but I've been in this business a long time now! I used to be real nervous about playing in front of a huge crowd or meeting certain people, but nowadays I like to have fun with it. I would have been real intimidated back in the 1980s doing something like this, but nowadays there's not a lot of shredding going on - well there is, but you gotta look real hard to ﬁnd it. It's fun to kinda spread the word and get people back into shred. I never did it in Creed. Shred didn't really ﬁt and, to tell you the truth, back when we started Creed I couldn't even solo that well. We had so much success with the format we had, it just never ﬁt in to the master plan of the band."

Did that not frustrate you?

"Yeah! It got frustrating because backstage I'd be playing and playing, and getting better all the time, but was never allowed to do it onstage. The biggest improvements I made in my playing came after Creed were done. There was a break in between the Creed and Alter Bridge days where I just sat with a bunch of other players. I mean, I took two guitar lessons in my life - I always learned through books and watching other people. I used to think, if I didn't learn it myself it wasn't my lick and I'd be ripping someone off if I used it, but then you learn someone else's lick and change it to the way it feels most comfortable for you and make it your own. It really changed my playing, just watching other guys."

Do you feel a certain responsibility for bringing shred back?

"Our ﬁrst album was called 'One Day Remains' and the theory was you gotta live your life like one day remains. We've all been in the business for a long time now, but we never really had fun with it because we were in the wrong situation. Now we're making all the decisions based on that theory that it could all end tomorrow. And what would I be doing if only one day remained? I'd be soloing man! I do it because it's fun for me. People at the record label say, 'Don't put solos on the radio,' but that's being narrow-minded. It's just something I think I've worked long and hard enough to do not to have to compromise. If people don't like guitar solos, if they don't like people trying to be the best they can be on their instrument, then they're frikkin' stupid." TG

Read part one of 'Mark Tremonti Interview: From the TG Vault'