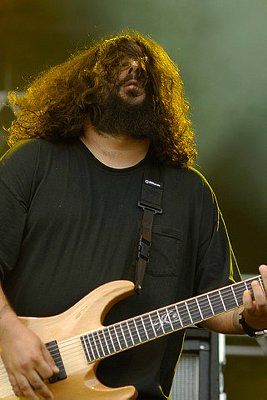 This month Sacramento slayers Deftones released their long-awaited sixth studio album 'Diamond Eyes'. In the second part of our interview with guitarist Stef Carpenter we get the skinny on his gear-list and riffs.

Check out part one of our Stef Carpenter interview

What was your main rig in the studio for 'Diamond Eyes'?

"It's the same rig I've had for the last decade. Amp-wise, I use a Marshall JMP 1 preamp and the EL34 power amp. I've used those since they were known as 9200s. That's literally the core of my sound. I have one rack effect, a Rocktron. I have a bunch of pedals, but most of that stuff is for fun when we're jamming. I'm using my eight-string ESP now, which is the only new guitar. Originally, I was all six-string. It's been almost 10 years since I started playing the seven-string, then when we finished touring 'Saturday Night Wrist' I got my eight-string. I used it making all the 'Eros' and 'Diamond Eyes' stuff."

How many songs did you have to choose from to finish the album?

"What you hear on the record is what we had. We had one extra song. I was bummed out that song didn't make it as it was another great song. We put 11 songs on the record. If it was up to me to make the final cut off on any of our records it would stop at 10 songs because the greatest albums of all time had only 10 songs on them. Plus, business-wise, you only get paid for 10 songs, so why put 12 or 13 on there? My entire life growing up and loving music, the greatest albums of all time had 10 songs. AC/DC's 'Back In Black' is an absolute timeless record. It's right up there in my Top 10."

Did you take a different approach to the sound or riffs this time?

"Nothing different. The thing I emphasise is just being in the 'right now'. You're not in your future, not in your past, we're here right now. There's never been a masterplan for any drop of what we do. Each record is simply a snapshot of that time when we were writing and recording it. I have no interest in hyping up [the new album]. I sometimes wonder why I do interviews because I'm not the one who's going to hype it up. S***, six months to a year from now this record's gonna be dead!"

Which are your favourite riffs from the record?

"I like every song as they're all unique to themselves. As a musician you record something you like or it doesn't get recorded. When we're jamming I really like the song 'Risk'. The way we play it happens to be good every time we play it."

Finally, how do you and Chino work as a guitar unit these days?

"Chino started playing guitar on 'White Pony'. In the beginning I was upset. It wasn't because he was playing guitar, but more by the inconsistency of his playing. When we play together I love the sound, it's a bigger sound, but my biggest gripe was the inconsistency. Now I don't even care. You wanna be inconsistent? Fine by me. As a musician when we're playing shows or practising I never used to say anything, but since 'White Pony' I always find myself getting on Abe [Cunningham, drummer] about his tempos. That's the perfectionist in me. I live with this duality that on one hand I thrive on perfection, but on the other hand I couldn't give a f*** about it."

Check out part one of our Stef Carpenter interview