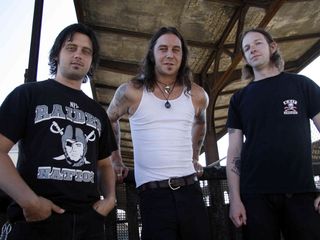 In the words of 'Futurama's Professor Hubert J. Farnsworth: "Good news everybody!" High On Fire are officially at work on a new album, with Kurt Ballou (of Converge) producing.

The Californian three-piece have revealed that the follow-up to 'Snakes For The Divine' is being recording at GodCity studios in Salem, Massachusetts - an appropriate place for a collection described in the press release as "powerfully supernatural" to be conceived.

Working titles include 'Serums Of Liao', Spiritual Rites', 'Warhorn', 'Madness Of An Architect' and 'De Vermis Mysteriis' and bassist Jeff Matz has said that hooking up with producer/Converge guitarist Kurt Ballou has thus far proved a good move.

"The sounds that the guy gets are ridiculous and raw as f***, but also clear and huge," Matz told press. "I think this album will capture the essence of the band really well. It's still early in the process, but so far it's sounding amazing."

What's more, Matz revealed that he and guitarist/frontman Matt Pike have been hard at work hammering out some seriously heavy guitar parts for the new album.

"The new songs are turning out absolutely punishing," he revealed. "There are some seriously sledgehammer riffs on this one."

No word on a release date yet, but we'd wager spring-time next year. In the meantime, here's a video of 'Frost Hammer' from 2010's 'Snakes For The Divine'.