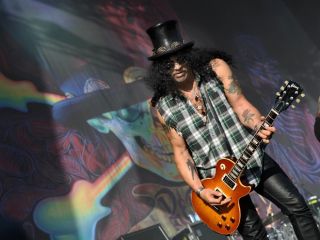 Slash has given TG a backstage pass to his LA studio and exclusive details of the second solo album, due for release in April 2012. Read the full story in Total Guitar issue 223 (on sale 28 December to 27 January).

"I hate to put this out there and have anybody feel like I'm bragging," he grins, "but it's really cool. Everything I do, I do because that's what turned me on as a kid. And I think I'd have been way into this album."

"We've toured together for a year-and-a-half," Slash says of the lineup's chemistry, "but we were pretty f***ing tight even in the first month together. It's something that just happened naturally. The guys are good players and we lock in. It's been like that ever since."

Slash's choices of signature Appetite Gibson Les Paul and Marshall AFD and JCM800 heads are familiar, but he reveals this album will find him playing leads over the rhythm work of Kennedy, with the band recording entirely live (as opposed to Slash's past tactic of overdubbing solos in the control room). "You have to know the songs like the back of your hand to be able to do that," he says, "so we rehearse the s*** out of them."

Three tracks are complete: the "heavy and dark" 'Bad Rain' with its drop-D tuning, the "riffy" 'Halo' and the "melodic" 'Standing In The Sun'. By January, Slash estimates, it'll be ready to roll.

"We're recording by the seat of our pants. The three tracks we've recorded are killer, there's so much material and it's so diverse, and I'm really excited. There are some really interesting riffs on this record, I can say that. There's a lot of riffage going on…"

Check out Total Guitar issue 223 (on sale 28 December to 27 January) to read our six page interview with Slash and a a full tab of 'Sweet Child O' Mine'.