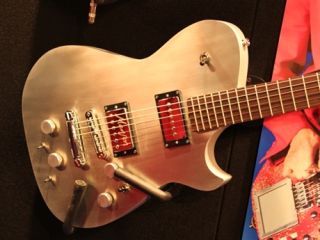 This weekend (23 to 24 October), Mansons Guitar Shop held its annual guitar show in Exeter, and used the opportunity to unveil a brand new Matt Bellamy signature model. Total Guitar was on-hand to grab these early snaps of the axe.

The DL-1 is inspired by the Muse frontman's 'DeLorean' guitar - the first instrument that famed UK luthier Hugh Manson and Matt worked on together, and continues the tradition of Matt's envelope-pushing designs.

First up is the distinctive body. It's made of alder, with a raw aluminium top and backplates. The DL-1 uses a Custom Manson P90 pickup in the neck position, while the bridge position can feature Manson either MBK-2 or MBK-3 humbuckers, controlled by a three-way toggle switch.

Of course, we've come to expect all kinds of electronic butchery from Matt Bellamy's guitars, so also present in the standard DL-1 is a toggle-kill switch. The DL-F comes with all the standard features, but has the added luxury of an onboard Z-Vex Fuzz Factory circuit and controls.

If that's still not enough, the DL-1FB has the same spec, but as well as the Fuzz Factory, there's a built-in MXR Phase 90.

The range of guitars starts at £2,999 for the DL-1 Standard, with the DL-1F and DL-1FP costing £3,299 and £3,599 respectively. Those interested in ordering should contact Mansons Guitar Shop, but be quick - Manson will only be producing 25 DL-1 models - once they're gone, they're gone!